Bicknoller – Bicknoller features in eminent 19th century nature writer Richard Jefferies’ essay Summer in Somerset. He mentions a yew tree (now gone) growing out of the church tower as if planted by a thrush. 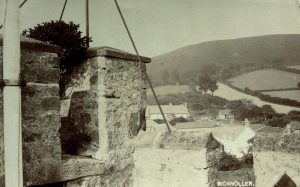 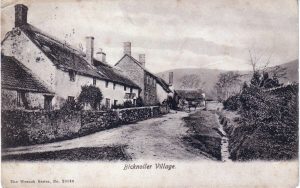 Bincombe – Here lies Broomsquires Cottage, home to generations of Broomsquires, makers of the traditional Quantock besom broom sold by pedlars around the West Country. Cecil Sharp collected many folk songs in and near Bincombe. The crossroads are where the Headless Galley Beggar, one of the most notorious Quantock ghostly creatures, likes to appear. 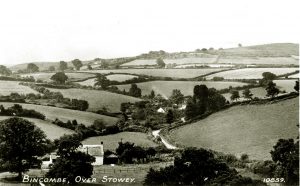 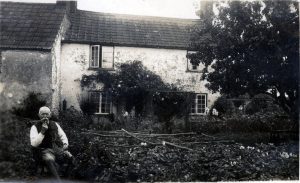 Broomfield – Cecil Sharp collected many songs from people living in cottages in the vicinity of Broomfield, including towards Buncombe. It was also the residence of a purported witch, an innocent woman persecuted by locals. 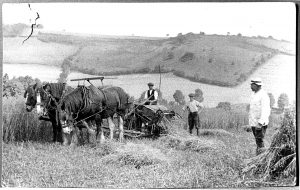 Buncombe – These woods were the traditional temporary camping ground of the Romany people when they visited the Quantocks.

Cothelstone – St Agnes’ Well. This is both a holy well linked to St Agnes and consequently a place of pilgrimage for women seeking love, and a pixie well in folklore. Cothelstone Hill and surrounds are also known for ghosts.

Crowcombe – Home of folklorist Ruth Tongue. The ruins of her cottage (on private land) were at Wharncliffe, suggesting another dragon from a lost folktale. Could this be the two-headed dragon on the wonderful carved bench ends in the church? Cecil Sharp collected many folksongs in Crowcombe. The village held one of the best known Harvest Home traditional celebrations.

Dowsborough Fort – It is said that at night one can sometimes hear the revelry of a Viking party, or the clash of weapons from a battle between Danes and locals. The story of this battle inspired Wordsworth’s poem The Danish Boy and various Danish Boy ghost sightings.

East Quantoxhead – Birthplace of artist Sarah Biffen in 1784, an extraordinary artist born with no arms and only residual legs. She painted holding a brush in her mouth. She was exploited in her early years, travelling in freak shows, but rose to be a society portrait painter – she even painted portraits of the Royal Family.

Halsway Manor – Now a National Centre for Folk Arts, in the 19th century Halsway Manor was a working farm and frequented by the Somerset School of Artists, including John North and Frederick Walker. The gates feature in Walker’s famous painting The Old Gate of 1869. It was later the home of artist Frances Gair Wilkinson.

The Herepath – This ancient road started in Combwich before following the route shown on this map. It was a Roman and Saxon route (sometimes known as King Alfred’s Way), both a military and a trade path as well as a traditional drove road. It is also a route purported to be taken by the otherworldly Wild Hunt, with its mythical Yeth Hounds.

Holford – This is the site of the now ruined Silk Mills, set up by Huguenots. It thrived from the 16th to 19th centuries, and at one point used silk farmed from silkworms in Over Stowey. It later became a blanket factory and was also where Bryan Adams’ Everything I do music video was filmed! Please note no access private land, though visible from lane. 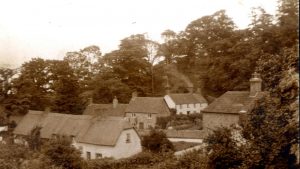 Keenthorne Smithy – This is the site of a legendary exchange between the blacksmith and the devil, who requested him to shoe his horse. Keenthorne was also the home of Harriet, a notorious witch.

Kilve – In the 5th century St Keyna is said to have come across the water from Wales and landed at Kilve beach. Ammonites found on the beach are said to be snakes that she turned into stone. Pardlestone Lane in the village is also associated with witches.

Kingston St Mary – Site of a fierce fire breathing dragon who was killed by a local man rolling a giant stone into its mouth as it roared. It was also the home of Mary Anne Gunningham, local telegram delivery woman who worked into her 80s delivering on foot to Quantock villages.

Nether Stowey – Nether Stowey and Over Stowey were two of the main places where Cecil Sharp collected folksongs in the Quantocks. Close to the castle is said to have once been home to some ferocious giants who also rampaged at Stogursey.

Ruborough Camp – Deep underneath the mound there is said to lie buried treasure and an underground castle only accessible via an iron door to be found at full moon. But be careful – get too close and it screams! Please note site on private land, but viewable from a distance.

Shervage Wood – The home of the Gurt Worm, the most famous dragon of the Quantocks, who likes to disguise itself as a log and interfere with the whortleberry harvest. It also contains Wayland’s Pool, where Wayland Smith, farrier to the Wild Hunt, cools his horse shoes.

St Audries to Holford Road – This road is notoriously haunted, with sightings of both Black Dogs (not the friendly Weacombe one) and a coffin lying in the road. Headless horsemen and ghostly carriages are also common ghosts in the Quantock area.

Stogumber – Site of a fascinating Shrove Tuesday Eve tradition, where people called from door to door a bit like trick or treating, but requesting pancakes.

Stogursey – Stogursey is an area famous for its number of pixies. There are various folktales, especially associated with Pixie’s Mound which is down towards Hinkley Point. Giants from Nether Stowey are also said to have flattened Stogursey Castle many years ago.

Triscombe – On the last Sunday in August a traditional harvest celebration called the Triscombe Revel was held. Folk music was played and people danced and ate local whortleberry tart. Other folk traditions include Shrove Tuesday and Easter ones, such as egg rolling down the hill.

Triscombe Stone – The folktales around this spot are somewhat hazy, though some say if you make a wish whilst sat on the stone it will come true. Another suggests that the Devil threw the stone at a man that cheated him and it went so far that it landed where it is today and so deep that only a bit of it shows. It is a supposed meeting place of the Wild Hunt, as well as a crossing point on the Herepath.

Watchet – St Decuman was said to have floated over the water, once known as the Severn Sea, from Wales on a hurdle or his cloak with a cow. He built a hermitage and upset the local pagans, or a Viking, who decapitated him! There is a holy well where he washed his head or it fell, which has healing properties. Watchet was also the home of John Short (known as Yankee Jack), from whom Cecil Sharp collected 56 sea shanties.

Weacombe – This is where the most famous of the Quantock mythical Black Dogs lives. It is unusual as most Black Dogs are ghostly and sinister, whereas this one is friendly and helps children lost on the hills.

West Bagborough – West Bagborough was the long time home of William Winter, (he was born in Lydeard St Lawrence) a 19th shoemaker and fiddle player whose notebook of Quantock tunes was discovered in 1960. The village was also visited by poet Edward Thomas, who stayed at the pub during his 1913 journey that became his celebrated and influential book In Pursuit of Spring.

Williton – Battlegore Field opposite Danesfield School was the site of two strange stones on the far side. These were said to the result of a throwing match between a giant and the devil, and one was said to even have the devil’s handprint on it! Now on private farmland.