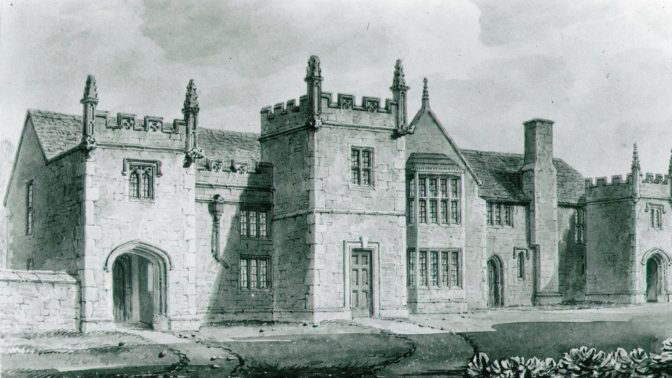 There are many tales of ghosts that haunt the Quantock area. Some are well known enough to have their own entry on this site, such as Dowsborough Fort with its sounds of revelry and battle and The Danish Boy ghost who features in Wordsworth’s poem – he is said to be the sole survivor of a battle between locals and the Danes, rescued by a Quantock woman who had been kidnapped. There are many others that are worth mentioning, even if the details are scarce.

One of the better known ghostly creatures is the Headless Galley Beggar who sits at the crossroads, sometimes known now as the triangle in Bincombe, between Nether and Over Stowey. Whether he is a ghost as such, or rather just a strange kind of supernatural creature is unclear. However we do know that he greatly entertains himself by sitting down at the triangle, ideally on a hurdle, removing his head and putting it under his arm, before pushing off downhill as if on a sledge, laughing all the way down. Reports of hearing his mirth stretch all the way to Castle Street. He is not known to hurt anyone – we can imagine him enjoying scaring people, but he mostly seems out for his own entertainment.

There are stretches of road that are notorious for being haunted. One of these is the road between Holford and St Audries. According to Ruth Tongue there is a Black Dog that haunts it, unfortunately not a rare friendly one like that at Weacombe, but of the ghostly bad portent from the other side variety. She also mentions reports of people seeing a coffin lying in the middle of the road.

Around Cothelstone Hill and the ridge that runs along near Broomfield and Ruborough there are reports of hearing a galloping horse and the clashing of metal. This could be a soldier from the Viking battle days or simply a horseman – horses and carriages seem to be common ghost sounds in the Quantocks. Indeed during the research for this project a local woman mentioned how her family had always heard of a crashing stagecoach riding past their farm, that made an absolute racket including the sound of breaking glass.. Local genealogist Cathay Birch in conversation mentioned a number of local ghosts, including a headless horseman and pack of hounds with red eyes near Cannington and in Cop Field not far away the ghost of a witch with a dog.

She also mentioned that the ghost of a nun haunted the Friendly Spirit Pub in Cannington. This is likely to be the ghost of Maude de Merriete who was a nun in Cannington in the 13th century. Interestingly her heart is purportedly buried in the church in Combe Florey. The de Merriete family from Hestercombe are buried in the church, but we have no proof that Maud was a relation, though it is likely. The tradition of burying a heart in a place separate to the body was not that unusual in the 13th century, as it ensured that prayers were given in two places for someone.

As well as the ghosts that roam the hills and roads, most villages, especially if they have ancient buildings, have their own ghosts. Even Halsway Manor has a few. One is a white lady that is said to walk between Crowcombe and Bicknoller via Halsway. She is purportedly called Elizabeth and the story goes that she was buried in Crowcombe but her true love in Bicknoller, so she walks there trying to find him. There is also a monk that is said to be heard walking the corridors, his footsteps echoing through the night, as well as a ghost named The Bishop who is said to chuck apples at people.

There are many many more. Ghosts are part of oral history as much as any other kind of story – there are versions of tales and each village has their own. The ones at Halsway are specific to the place as well as more generic in terms of type of haunting. If there were to be one kind of unique ghost to the Quantock area it would be the preponderance of ghosts connected to the battles with the Danes – from The Danish Boy and ghostly riders, to battle noises and presences felt round purported battlefields. There are also numerous reports linked to Judge Jefferies and the Bloody Assizes. Key connected sites, such as Heddon Oak near Crowcombe, are thought to be haunted by those he condemned to execution after Monmouth’s Rebellion.