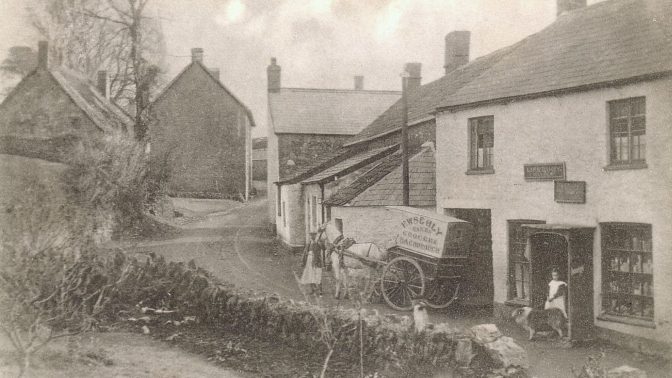 In 1960 a notebook was found in a second hand bookshop in London. Imagine browsing away, not sure what you are looking for, when rather than a printed book you find a handwritten notebook. It is not the shape of a normal notebook – more landscape than portrait in format. You open it and you discover the reason: there before you are handwritten lines of music. You have a feeling you have discovered something special and you really have.

Though far away from Somerset, this book had its heart in the landscape of the Quantocks, for it contained the tunes of a 19th century local fiddle player, lovingly written down, showing his repertoire. This fiddle player was William Winter and his tune book is now one of the most prized possessions of the Halsway Manor library.

Born in Lydeard St Lawrence in 1774 and later moving to and spending much of his life in West Bagborough, before moving back to Lydeard St Lawence before his death in 1861, William Winter was a musician with a truly local knowledge, an ordinary man (he worked as a shoemaker) playing his music for pleasure. He married, had five children with his first wife Mary (she died and he remarried a widow Ann Morle), and as far as we know rarely strayed out of this small Quantock area.

The manuscript itself is quite extraordinary for its repertoire of traditional English country dances. It contains over 400 dance tunes including jigs, waltzes, hornpipes, marches and quadrille sets, as well as 30 song tunes. Some of them would have come from 18th century collections and have been rewritten here by Winter, others are versions of 17th Playford dances. We also know that sheet music was available in Somerset both from mail coach and later train delivery. There was also a music shop in Taunton.

Whilst we know that William Winter was a working shoemaker, we can presume that he played in local bands on his fiddle. Local bands would have played at country dances and traditional celebrations and there is one clue to this being the case in his manuscript, as one of the marches is labelled May 29th. This is Oak Apple Day, a traditional day of celebration to mark the restoration of the monarchy. People would have decorated their front doors with oak branches (Richard Jefferies comments on seeing evidence of this in his 19th century essay “Summer in Somerset”) and some have worn oak leaves in hats and lapels. It would have been possible that there would be a village country dance as well, and therefore that William Winter would have played in a local band at such an event.

The manuscript is signed and dated twice, once in September 1848 and again in March 1850. Other than in one short section even the staves were handwritten. Winter may well have copied some of the tunes from printed material, but it is also likely that he wrote some down from oral sources, giving us a real insight into what were the popular tunes locally. Many folk tunes and songs exist because they were recorded by collectors in the 20th century, so whilst earlier printed manuscripts, particularly of dance tunes, exist, to find one that is a personal collection of a real local musician in the 19th century is an important discovery.

The manuscript now lies in the Halsway Manor library and because of its importance Halsway has printed the tunes in a book, which also contains a CD of the music and a detailed introduction to the man and his life. The book is available to buy directly from Halsway Manor.