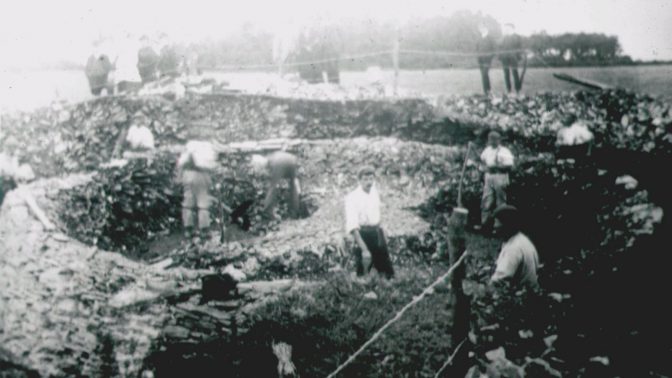 Between Stogursey and Stolford, right close to Hinkley point, there is a large mound, still known today as Pixies Mound. It is even named as such on the Ordnance Survey map! Surrounding this place stories abound.

There are tales of how it can never be removed, if someone tried to demolish it, it would be rebuilt at night; there are tales of how it is a well-known pixie haunt, of moments when locals have even interacted with pixies there. A good example of the latter is the story of how a local ploughman found a little broken bread shovel on the side of the mound, which he mended, and in its place the next day he found a delicious little cake, hot from the pixies’ oven. Other sources say that it was a child’s spade, but with the baking element of the story bread shovel is more likely. This is interesting as a similar tale is connected to other tumuli and mounds, but usually further north, including in Nordic countries. Other people, including a farmer in a folktale, purported to hear a baby crying in the mound, but it was actually a pixie.

There is another story of a farmer on Wick Moor (again this immediate area) who became very confused as he had his whole crop to thresh but when he went into the barn in the morning, the work he had left the day before was all done. He was getting very confused as he could even hear his corn being threshed in the middle of the night! However he fell foul of one of the things you should never do, which is try and see the pixies at a time not of their choosing. His wife had guessed what was happening and pleaded with him not to go and take a look, but curiosity got the better of him. He said it was rude not to say thank you, but his wife knew that even though this would be polite, trying to see them without their permission, rather than say leaving a gift (something some farmers say you should do on a regular basis – it is common to leave them milk or even the last apples on the tree – this is known as a pixy-hoard or pixy-word), would make them disappear.

He went to the barn and caught them half way through the threshing, some done and in sacks, the rest lying on the ground still. He said thank you as he was so pleased, but the pixies immediately left and the next day the unthreshed corn was still on the ground and the farmer never saw the pixies again.
This story shows how pixies can be very helpful but things have to be on their own terms. You should never knowingly annoy a pixie, force a pixie to be seen or do anything that could be seen as ill-mannered.

If you are kind to them, they may repay you, such as in the story of the bread shovel, or there are even reports of gold having been left to kind or generous farmers, but if you annoy them they might disappear and stop helping, or worse, use their magic for bad. For example, the eyesight has been damaged of those seeing pixies when they shouldn’t (this is also true of fairies, particularly those who see and report the Fairy Fair). It is also best to leave things like the pixy-hoard last apples on the tree. To not do so could be seen as an insult and so it is a long-standing Somerset folk tradition.

Pixies are not malicious though and they like to have fun. This makes them practical jokers and there are many reports of people being “pixy-led”. This basically means being led astray and getting inexplicably lost. Folklorist Ruth Tongue reported there were some traditional things to protect oneself against this, such as wearing your jacket inside out or just turning your pockets out. But in general you didn’t stand much chance if a pixie was determined. There is one Quantock report of a farmer up above Quantock Farm who roamed his own field all night with no idea of where he was! He couldn’t find his way out until the next day, when suddenly he realised exactly where he was.

One way pixies enjoyed preparing a field for people to be lost in it is to create a “gallitrap”. A gallitrap is an invisible barrier that makes a pixie ring that if you wander into you cannot get out until they let you. They often make them by riding ponies around the periphery.

There are many pixie stories around Stogursey and they are also common in stories and folk reports all over the Quantocks. Some areas, such as Bishops Lydeard, also seem to have a dense population!