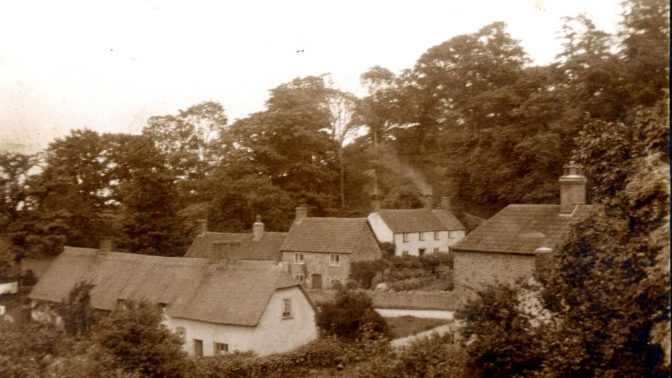 In the 16th century there was great upheaval in France. People were being persecuted for who they were, their faith and their identity, and some of them fled to England. They were the Huguenots, a Calvinist protestant group, violently pursued by the Catholic French rulers from the wars of religion of the 16th century all the way through the 17th century. By the end of the 17th century the Huguenot population of France was almost wiped out.

The Huguenots that came to England were refugees, and whilst they did not have much with them they did bring their traditional skills and industry, especially weaving and textiles. It is well known that they settled around the Spitalfields area of East London, but other families travelled further afield, one group moving to the Quantocks and changing the traditional rural industry significantly. They settled in Holford and set up a Silk Mill c.1590.

Holford is a Quantock village of surprises. It is easy to drive along the A39 and miss the smaller roads full of cottages, the streams and entrances to the beautiful steep coombes that climb up the hills to the common, the mysterious dog pound. However if you do stray off the main road and peer over the low wall you will see, now sadly on private land and a little dangerous to enter, the remains of the old silk mills. You might even recognise them from something else and not be quite sure what – they were the setting for the video for Bryan Adam’s video for the huge 1990s hit Everything I do!

However the Silk Mills are an incredibly interesting relic of what was once a thriving Quantock industry employing over 300 people in a non-industrial area where there were not many options beyond farm work. The Silk Mills were set up in the late 16th century. The exact date is not known but sources suggest that the founding weaver was called Hayles and that he founded the mills c.1590. At first the raw silk used in the mill was imported from France, however there was a local supply, in that silk worms were farmed in Over Stowey, and their silk became an equally important supplier for the mills, making it a complete Quantock industry. The silk would have been dyed in the dye house and the natural dyes that were the only option at this time pre the chemical dyes we use today, would have been gathered on the hills, including whortleberries, dock, gorse, birch, nettles, bracken, brambles and many more (though their dye colours would have been muted and earthy in tone as is the case with most natural dyes). Insects and lichens are also used for certain colours in natural dyeing.

In its heyday the mill was quite an impressive operation with five water mills, four buildings and a saw pit. Water is key to the silk and dyeing process and the location in Holford with the natural springs and streams with soft water was ideal. The weavers dammed the stream in Holford coombe and this powered the water mills.

However the original silk industry waned, especially with both raw silk supply and export difficulties in the late 18th century due to the French Revolution. The mills became a blanket factory before a huge fire destroyed the buildings and in 1830 the site closed. It has been a ruin ever since, quietly sitting in the centre of the village, a ghost of a once-thriving industry at the heart of the Quantocks.