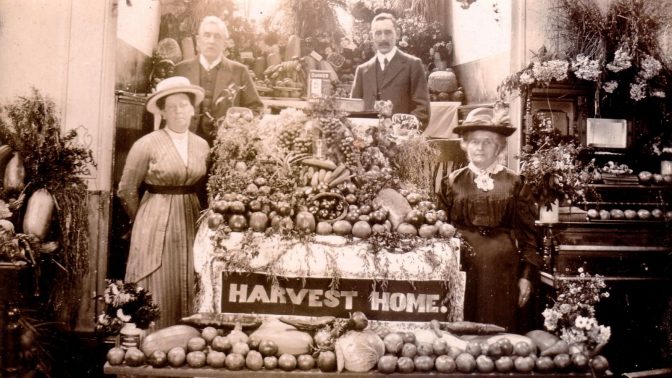 Many people from the Quantocks, especially those who live in Crowcombe, have heard of Ruth Tongue. They remember her reputation as a folklorist and dramatist; how she was a rather formidable and eccentric older lady; they may have read one of her books in the Halsway Manor library, where her archive is stored; but the roots of her interest in folklore and her earlier years are less common knowledge and her reputation as a folklorist has had its ups and downs.

Born in 1898 in Staffordshire she later adopted Somerset as her true home, having imaginatively bonded with it as a child living in Taunton. For a while her childhood address was Castle House and she referred to herself as having lived in the castle, being inspired by ghosts and running around listening to folk stories at Taunton market. She found the area full of magic and inspiration and on a school trip to St Audries Bay in 1907 thought the waterfall and a cave were an entrance to another world used by Sea Morgans and other supernatural beings! Already at the age of nine the seeds of Somerset, folklore and imagination were sown and growing in her young mind.

After her childhood in Taunton, attending the junior branch of Bishop Fox’s school, Ruth moved to Harrow in 1910 where she attended the high school before later studying drama at The London College of Music. At this time in her life she created hand written illustrated books of fairy tales, showing a beautiful attention to detail and a vivid imagination. She continued to live in London and the Home Counties for many years, working as a teacher, as well as developing her interest in writing and theatrical performances, but she never forgot the draw of Somerset.

In 1954, now in her mid 50s, Ruth moved to Crowcombe and Wharncliffe Cottage on the Crowcombe Court estate. The cottage was later destroyed by fire and still exists but only as ruin.

She was hugely involved in village life, from the WI to gymkhanas and local dramatics, including many plays for children. She was always extremely fond of animals, especially horses, and during these years, as her ponies became older, she threw herself into folklore collecting and recording stories from her Taunton childhood. She began to publish, including Somerset Folklore in 1965 and The Chime Child in 1967. She built a relationship with EFDSS (English Folk Dance and Song Society), Theo Brown at The Folklore Society and Dr. Katherine Briggs, a folklore academic at Oxford University, who edited some of Ruth’s work.

Ruth’s reputation was brought into question as the provenance of her stories was questioned by academics – she could rarely say or prove where her stories had come from. Ruth undoubtedly had a love of embellishment and the dramatic, but at the same time it is important to remember that a lot of these stories were recalled from memory, sometimes from her childhood – there may be elements of fiction, but who as a ten year old listening enraptured in Taunton Market to folk tales, would think to write down the name of who told her and the story’s provenance?

It is also worth mentioning that whilst some doubted her sources, others such as Katherine Briggs took her seriously. It is unlikely that such an eminent academic folklorist would have stood by someone they felt was a fraud, and she certainly would have done her own background research. Some of the terms she used that people thought she had made up and used against her authenticity, such as calling the channel between the Quantocks and Wales the Severn Sea, have been proven through numerous other sources to be in common use in the 19th century, vindicating Ruth further. So eccentric and dramatic with the odd embellishment yes, but fraud no.

When Halsway Manor became a folk arts centre in 1965, Ruth was suspicious of outsiders coming to the Quantock community and setting up such a place, but in the 1970s Ruth became involved in activities at the manor. By this time she was very frail with failing eyesight. Wharncliffe Cottage had burned down in 1965, she had moved to Hagleys Green and she had lost many of her manuscripts. She died in 1981 and her ashes were scattered over the Quantock Hills. After her death Halsway Manor was left Ruth’s archive, including her handwritten notes for her books such as Somerset Folklore, which can be viewed by visitors to their library.

Ruth’s ruined cottage is now on private land and is difficult to visit, though wandering through the beautiful old village of Crowcombe it is possible to imagine her life there in the mid twentieth century, the old cottage stuffed with papers, Ruth surrounded by children and animals. The address of her cottage is also interesting and quite extraordinary that she doesn’t mention in more detail. Like worm (as in the Gurt Worm, a story Ruth retells in Somerset Folklore), wharn is an old word for dragon. So effectively Ruth’s address was Dragon Cliff. Yet Crowcombe is too far from Shervage Wood for any dragon mentioned to be the Gurt Worm and the other famous Quantock dragon is from even further away in Kingston St Mary with other Somerset dragons further still, such as the famous one at Norton Fitswarren. However Crowcombe church perhaps contains a clue, as resting carved into one of its bench ends is the most fabulous depiction of a two-headed dragon. Neither the Gurt Worm or the Kingston St Mary dragon are two-headed so it is possible that rather than just artistic license this carving was inspired by a lost Crowcombe folktale, perhaps even the dragon that Wharncliffe was named for?