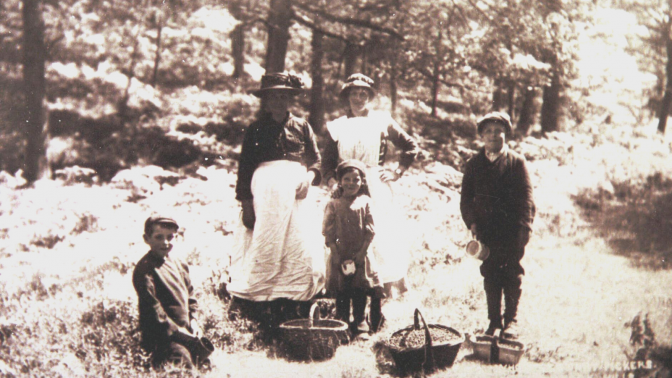 There are a number of dragons in Somerset tales, including more than one in the Quantock area (see other articles), but The Gurt Worm is the most widely told. We do not know exactly why this is: perhaps it is the brilliant quirky name (though historically worm or wurm is simply the old word for dragon), perhaps it is the location or the details of the story itself; whatever the reason, whilst some tales are almost lost, The Gurt Worm survives.

As is the nature of folktales, there are various different versions of the story, some sadder or more violent than others, and other newer versions retold for children and specific audiences. The most widely documented is the version told by Ruth Tongue in her book Somerset Folklore. It is a simple version, holding the bones of the story that other versions also keep. It tells of a dragon in Shervage Wood that was terrorising locals. Interestingly it was mainly ponies it had eaten, rather than humans (a detail itself giving it a Quantock flavour with the history of ponies being grazed on common land).

According to Tongue’s version the location of the dragon’s favourite haunt was closer to Dowsborough Fort than the lower regions of Shervage, signposted today from the A39. The dragon or worm itself was described as huge and as fat in girth as two or three large oaks. As well as the ponies, some local shepherds had noticed that some of their sheep were going missing. Apparently the dragon could eat as many as six or seven ponies or sheep at a time!

One of the regular pass-times of Quantock locals for hundreds of years has been the picking of the whortleberries which carpet the woods. In Tongue’s retelling one of the key problems of the dragon’s presence was that everyone became too scared to do so. Triscombe Revel, an annual celebration, was approaching. People were getting anxious and wanted to check on the ripeness of the berries. This lack of whortleberries was a real problem. People relied on them, including one poor woman who made the most delicious whortleberry tarts and whose livelihood depended on selling them. But then some men, shepherds and broomsquires, so people who knew the hills well, went up to the woods and didn’t return. The anxiety escalated as it was presumed that they had fallen victim to the dragon.
Something had to be done.

Around this time a stranger arrived in Crowcombe, a woodcutter looking for work. Tongue’s version suggests he might have been from Stogumber, a village that is very nearby by modern standards, but the fact he had not heard about the Gurt Worm, highlights how further distances seemed pre motorised transport. The old lady who made the tarts met him and cunningly suggested that he try up on Shervage Wood for his work and whilst he was up there she would be much obliged if he could see how the whortleberries were doing.

The woodcutter agreed and went up to Shervage Wood. He looked around and there were indeed swathes of whortleberries, left unpicked. He decided it was time for a break so looked around for a suitable place to sit. His eyes landed on a great log amongst the ferns and sat down on it, not realising that the log was actually the Gurt Worm (one curious detail that links all the versions of the story is the dragon’s propensity for disguising himself as a log). As he started to eat his lunch the log began to move. The woodcutter panicked and cut the log in two with his axe and it began to bleed!

The Gurt Worm was cut in two. It didn’t die straight away, but rather the two halves ran in different directions, one half toward Bilbrook, the other to Kingston St Mary (interestingly a village with its own dragon – a different story), where the two halves died.

The woodcutter returned to the village with his hat full of whortleberries, but the Gurt Worm was no more.

Other versions of the story describe the Gurt Worm’s death in more violent or tragic terms, blood flowing over the hills rather than the rather quaint two halves running off without fighting back at all. Others are more simple and less definitive. Rex Whistler’s version, found in a guidebook of 1907, has the woodcutter knowing of the dragon, but needing to make a living, he went to the woods anyway, when he thought the dragon was away. Again he makes the mistake of sitting on the Gurt Worm disguised as a log, but rather than cutting it in two, he simply sticks his axe in it and runs, leaving the dragon’s demise a matter of debate. He suggests children tell of it with bated breath as they collect whortleberries, and it could be argued that one of the reasons it has lasted in common knowledge better than other Quantock folk tales, is this frisson of it maybe still being out there, and the pleasure of children in seeing if they can spot a suspicious looking log…

It is also a tale that continues to inspire, with recent retellings for children, including by storyteller Clare Viner in her book The Emerald Dragon, where the dragon itself has a fondness for whortleberry pies! Another cosy detail for a somewhat fearsome beast, differentiating it from other dragons and their murderous rampages and showing how much local flavour is absorbed by folktales. Dragons are a common theme, but their personalities vary and as with all folktales have a significant site-specific element. They also have that inherent ability to stay in our imaginations and evolve with time. We are free to retell, to add our own local flavour and interpretations, ensuring that creatures such as the Gurt Worm continue to live for future generations.