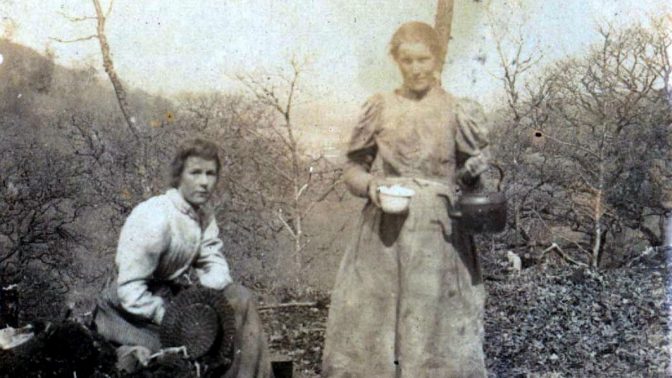 The Romany people are incredibly important to the history of this country, yet as a people they are often overlooked and sadly villified when they should not be. It is difficult to say if we can ever appreciate the richness of what they have contributed to our history, as a lot is not known about these incredibly private people. However we do know some of what they have contributed to the folk and intangible heritage of the Quantocks.

Firstly some of the key Broomsquire families were of Romany origin, of particular note the Palmers who lived in Bincombe. Whilst this traditional Quantock craft was not an exclusively Romany occupation, the travelling nature of most Romany families (the Palmers were the exception, having settled in Bincombe) meant that they were responsible for traditional Quantock made besom brooms travelling all over the West Country. This was because many families bought the brooms to sell on on their travels.
The traditional way of making a living for Romany families contributed to the rural economy and rural trade in essential ways. For example many Romany families provided excellent seasonal farm workers, which was incredibly important at harvest time. The Romany way of making a living through trade, whether as pedlars or through their own crafts, meant that both Quantock crafts travelled, such as the brooms, but also that some rural communities were able to buy things that might not have been available in a village shop and entailed, what in those days was, a long journey into Bridgwater or Taunton. There is a wonderful account in ‘Roses in December’, Rosemary Chant’s memoirs of her childhood in Combwich at the turn of the century, of the excitement when the gypsies came to the village with everything from practical supplies to decorative homemade artificial flowers for sale. These yearly visits were part of her childhood and part of the life of the village.

In the Quantocks visiting Romany tended to set up camp in the woods at Buncombe. From here they might go and work in the fields, or travel to Bincombe to buy brooms to sell. These traditional camps might include the well known beautiful wooden painted caravans, but also more temporary structures such as “pop up” tents, known as bender tents. These were of an arch shape and were easily constructed, forming a hood similar to that pulled up on a traditional pram. They could be set up quickly in a large camp round a caravan for extra space, or put up in a hedgerow or similarly sheltered place when a quick rest or night’s sleep was required. They were made using bendable wooden rods made of willow or hazel, which when bent into an arch shape and put in the ground, providing a frame for whatever covering was available – sailcloth or blankets for example. At times when a number of Romany families visited, Buncombe woods might have been full of these structures, tucked under trees, making a temporary village. People would make a clearing in the woods then set up camp, usually in groups of about four families and settle for a week of so as the men worked on farms and the women went around the villages selling things.

The Romany people also contributed hugely to the folk music heritage of the Quantocks, in that if we dig a little further into the background of many of the local villagers that Cecil Sharp collected songs from many were of Romany heritage. For example Elizabeth Coles and Elizabeth Starkey were both Palmers by birth. Mr Thomas Stanley of Spaxton was also of Romany heritage. Maud Karpeles in her autobiography of Sharp also talks of his interest in gypsies and acknowledgment of them as a rich source of folk song. It was said one of the reasons he travelled by foot was to make sure that he didn’t miss a gypsy camp, and there is a great story she retells of him meeting a gypsy woman at Simonsbath towards Exmoor, who sung him an extraordinary murder ballad, who he then followed into North Devon and then tracked down her mother, saying it was one of the most interesting folk songs he had heard.

There are also traditional Romany folk dances, such as the step dance tradition, which are still continued today among some local Romany families, whilst having died out in the wider community. This dance entails a three foot square wooden board being placed on the ground and danced upon. It is fascinating to think that these could be more authentic Quantock folk dances than the more imported steps of better known folk dance such as Morris.

When thinking of intangible heritage it is important to think of all people who lived in a community – every person’s life contributes over years to building the patchwork of stories and traditions, the cumulative living history that is part of a place’s identity. Written records of the Romany, except in anecdotal evidence from others writings, are hard to find. There are many stories, but these are pure fiction – a stereotype of the Romany, rather than real accounts of their lives. As is the nature of folk history, much Romany history would have been passed down orally, and then between family members rather than with the wider community. We have glimpses, such as the songs Sharp collected, or recollections of Broomsquires, but their fascinating stories remain part of this landscape, an integral part of the heritage of the hills.