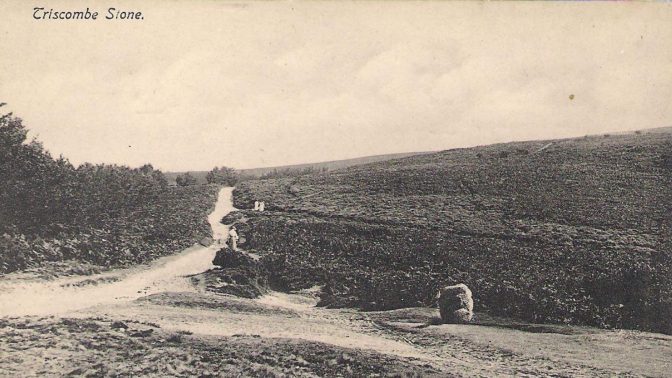 There is an ancient path crossing the Quantocks that many of us will have followed without realising it. We drive our cars, ride our bikes, walk across the bits now grassed over, where for hundreds, indeed thousands, of years people walked or rode before.

This route has seen soldiers and farmers, Saxons and possibly Romans. It has been a military path, a drove road, it has been a lifeline for remote hamlets and villages, the way trade has moved further south and west. It is the Herepath, and it partly follows the road route we still use today.

The route of the Herepath starts in Combwich, which was once an important port due to its estuary position and access to further up the River Parratt. It then ran towards Cannington, before moving west towards Nether and Over Stowey, climbing up and over the hills to what is now Crowcombe Park Gate, before turning along the ridge to Triscombe Stone and then descending the other side.

Whilst the main road towards Combwich, and then the A39 from Cannington to Nether Stowey, have veered from the original Herepath route, changing with the centuries, the road that runs from Nether Stowey to Bincombe and up over the hills to Crowcombe Park Gate is the old Herepath, just tarmaced as a modern road. The twisting sessile oaks, the magical-feeling tree tunnels leading up to the common and the heathland and its far-flung views, would still be familiar to travellers from the past. It is fascinating to think that whilst we might be driving on a normal country lane, the atmosphere and feeling of the route we are taking could be unchanged for hundreds of years, that the oldest of the trees might have witnessed fascinating historical events, that this rural place has an extraordinary and varied human history.

The Herepath is most talked about historically in reference to King Alfred and the 9th century. It is also locally known as King Alfred’s Way, in reference to how it was a military route for his soldiers at the time of his battles in Somerset, including locally with the Danes. Viking invasions were a problem in the area at the time, including landings at Watchet. In fact Herepath is a Saxon term referring to the military roads that connected the fortified burhs (settlements) and helped protect them from Viking invasion.

Once today’s road reaches Crowcombe Park Gate however it diverges from the Herepath. To follow the route of the Herepath, one has to park and continue on foot, turning left and following the ridge south to Triscombe Stone (if looking at an Ordnance Survey Explorer map the best option would be to follow the path marked the Macmillan way). It is then unclear of the exact route, but we know from written evidence that it then descended the hill and continued west.

In terms of the intangible and folk heritage of the Quantocks the Herepath is interesting for another reason, in that it is widely reported to be one of the routes of The Wild Hunt. The Wild Hunt is often misunderstood – people think it is a hunt of ghosts or the devil (though medieval accounts from monks give it a diabolic descent), but the usual folklore explanation is that it is made up of creatures from the Otherworld – the realm of the dead, rather than being actual ghosts or connected to any Christian beliefs. The Otherworld creatures that make up the hunt are a mixture of horses and horsemen and Yeth Hounds. Yeth Hounds are not quite the same as the Hell Hounds that appear in some stories and appearances of the Wild Hunt in authored fiction rather than folktales, or the ghostly Black Dogs that are ubiquitous in folklore.

No one knows exactly why the Wild Hunt sets out, flying through the air, a deathly apparition roaming menacingly. We know that locally it is supposed to follow parts of the Herepath, that you ought to be cautious at Triscombe Stone at night as it is a place it likes to meet, that there are also reports of it flying near Watchet and over towards the Brendon Hills. We also know the superstitions that surround it; that it is incredibly unlucky to see it, that whilst it might not hurt you in that moment, if you were to meet it it could be a premonition of your death. This could be because they are from the land of the dead. Other creatures that are seen as deathly premonitions, like some Black Dogs, are also creatures that are said to be able to cross into the realm of the dead.

The term Wild Hunt was actually coined by Jacob Grimm, but this was to find a modern folkloric term for an old phenomenon that interestingly appears in ancient folklore and beliefs across Europe. The Wild Hunt varies from country to country, sometimes it can be seen, sometimes only heard, but this sense of it being a hunt that rides full of creatures from the Otherworld is consistent, some countries having a lead rider, such as Odin in Scandinavia, or in England sometimes it is blurred with the myth of Herne the Hunter who joins it. But there is no evidence of the Quantock Wild Hunt having a named lead rider or blurring with Germanic or Scandinavian myth. However, in all traditions it is a terrible portent to see or hear it. It can signal an approaching war (perhaps it is associated with the Herepath because of its history as a military road and the local battles with the Danes), or at least a personal tragedy or one’s own death.

The Quantock Wild Hunt has its own twist on the tale in the form of the legend of Wayland Smith who was said to be The Wild Hunt’s farrier. Associated both with Keenthorne, but more with Wayland’s Pool in Shervage Wood, as well as shoeing the Hunt, it was said that if you were brave enough and left your horse without looking back, then he might shoe your horse for free. The pool was supposedly where he plunged the red hot shoes to temper them.