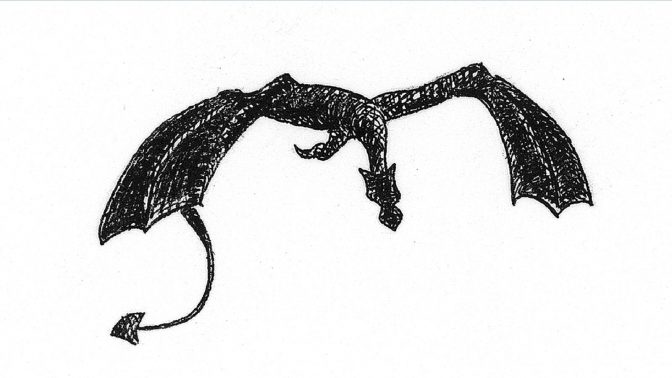 Unlike its more famous Quantock neighbour the Gurt Worm, the dragon associated with Kingston St Mary is always a fearsome creature. There is not a narrative build up to his presence or demise as in some folktales, we just know that he breathed fire and therefore was impossible to get near as he would burn anyone to death.

We know at some point that the dragon had to be dealt with and a brave local man decided to climb the hill near Ivyton, on top of which lay a large stone. When he reached the summit the man shouted to the dragon to get his attention and when the dragon opened his jaws to roar flames, the man pushed the stone as hard as he could and it rolled down into the dragon’s jaws, choking him to death.

Dragon myths in the area are particularly interesting in that there are alternative explanations for them. Whilst many would see them as simple tales of mythical beasts as found all round the world, the Quantocks are positioned near the sites of various dramatic historical events, from the invasion of the Vikings, King Alfred’s Somerset history and later the Bloody Assizes. For such a peaceful part of the rural landscape today it has a dramatic history of battles. The dragons are interesting in reference to this in particular, as the Danes were said to have dragons on the standards. Some have argued therefore that the dragons, particularly the more traditional fierce fire-breathing kind as that told of at Kingston St Mary, are actually folk representations of the Danish Viking raiders, metaphors for an invading force that needed to be overcome. “Real” dragon or metaphor, we will never know, but what is clear is that something inspired this tale beyond the ordinary life of an ancient village.