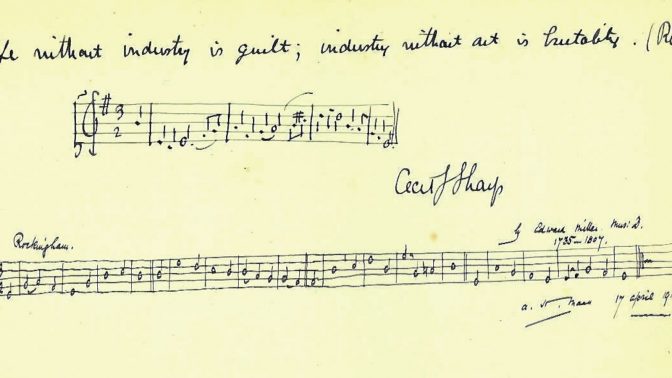 In 1903 the village of Hambridge in Somerset had a visitor. His impact on Hambridge was small but not insignificant to those who met him, but Hambridge’s impact on him, and after this the wider county of Somerset, including around the Quantocks, was vast. The visitor was Cecil Sharp, who had come to stay with his friend Charles Marson who was the local vicar.

Nowadays Cecil Sharp is perhaps the best known and most visible player in the history of English folk song and dance. In the Cotswolds his work with Morris dancers was preserved but in Somerset it was all about the music. In 1903 he was simply an enthusiast, deeply curious, wondering if he could find true English folk music. This music and its preservation became his lifetime’s work and in Hambridge he found the song that made him realise just how rich Somerset’s song heritage might be. Sitting in Marson’s garden he heard his gardener, John England, singing The Seeds of Love. He immediately realised what he was hearing and noted the song down – this was not simply a popular song, but one that he could tell was old and the real deal. He had found his calling, and his quest for folk songs would lead him deep into the Quantocks.

Somerset is key in the history of folk music. Whilst there is nothing to suggest that Somerset in the early 20th century was richer in song than any other county, the fact that it is where Cecil Sharp focused his first three years of song collecting, means that we have a record of song at an important moment in time and of change, that is richer than that of many other places. We know what was sung in Somerset, as Sharp’s mission ensured that it was not lost. We can assume that some songs were strictly local and others were songs with versions country-wide, but Somerset acts as a microcosm for the folksong of these years, the case sample of the richness of English folk music, before this generation of singers died.

Sharp didn’t focus on Somerset based on prior knowledge or a feeling that it was different, but rather out of practicality – it was easy enough for him to reach and he had friends such as Marson here. It was a deeply rural county, so one could presume less affected by urban popular song and imported music, and it was the place where he first heard The Seeds of Love. That discovery was a beginning, not an end.
Sharp’s method was based on an obsession with not missing anything and a lack of funds. In those early days, folk song collecting was his passion but not his paid work – he had to self-fund his song collecting expeditions. Because of this he travelled the Somerset lanes by bicycle. He could not afford to run a car, but would not have wanted one in this instance, as if in a car he might miss a stone cutter singing by the side of a road, drive past a gypsy camp without realising – he might miss the genuine folk singers that he was trying to find.

He travelled from village to village, including through the Quantocks and further into West Somerset and Exmoor. In the Quantocks key villages he collected from were Nether and Over Stowey (including Bincombe), Crowcombe, Combe Florey and Broomfield. This would not just mean the main village, but any individuals he discovered who might live in remote cottages or be out working.

When he arrived in a new place his first aim was to find the old people. Experience taught him that if he arrived and asked for singers, he might not get folk singers, but rather people who liked to sing and consciously chose more popular tunes. He found that by meeting the oldest people and then bringing the conversation around to singing that he might discover the true folk songs handed down through generations in certain families. Even when he found the right person for what he wanted, it was often a matter of great patience, of talking and listening, first to what they thought he might want to hear, before the true old songs might come out.

There are many anecdotes, including some interesting ones in Maud Karpeles’ biography of Sharp, of Sharp having to listen to gramophones and well known popular tunes, music boxes and all sorts, before finally the most beautiful folk song emerged. There are also fascinating tales of his obsessive nature and dedication to finding a song. He might go out in the fields or sit at roadsides and listen to songs between a worker’s task, whether stone cutting and trying to avoid getting hit with the off cuts, or once writing a tune down between a bird scarer’s duty of every now and then making a racket.

He was also fascinated by gypsy families and once on hearing an amazing murder ballad spent days trying to track the same family in Devon, having discovered them in Somerset, and then travelling further again to find the singer’s mother to see if her version was slightly different. This sounds obsessive an extreme length to collect a song but there was an urgency to Sharp’s task in Somerset, as at this time these songs were in danger of being lost! If you asked the average person in 1903 about folk music, the general response would have been one of ignorance. Maud Karpeles in her biography of Sharp, quotes the probably true joke that if anyone thought they knew folk music at the time the chances were that what they had heard was Irish music rather than English folksong. Folk music was out of fashion and consequently even if you asked for old songs, most people would have thought you meant popular old songs – those with known composers and not folk songs at all.

But how did Sharp know when wandering Somerset what was a genuine folksong? These things were not documented, and by definition with no known composer, a folksong was hard to “prove”. Indeed it could not be proven, but there is a definite sound to a true English folk song, for example the use of certain modal scales and rhythms, plus if a song had clearly been passed down through generations and was sung by ordinary rural people, the chances are it was genuine.

These songs that had been handed down also held an emotional importance that others did not. For example in Bridgwater workhouse, Sharp heard a man sing a song who then began to cry as he was so pleased that someone was taking it down, saving it for the future. These true folk songs are part of the people who sing them, their lives and history. One old woman singing for him in a field paused her work and just said “isn’t it beautiful…”.

Sharp would listen carefully. These were the days before even tape recorders, so Sharp had to get the tune down in staff notation and also write down the words. We can imagine him getting the song repeated a number of times, making sure that he got it down as accurately as possible. Later he would arrange accompaniment for them, and he arranged performances with singers such as Mattie Kay, including in 1903 at the Hampstead Conservatoire where his discovered songs from Somerset were first revealed to a London crowd. He was a passionate educator and believed in making sure these songs were heard as widely as possible.

1904 saw the publication of the first volume of Sharp’s Folk-Songs from Somerset. Four more followed, the last in 1909. Sharp arranged all the settings – traditionally they would have been sung without accompaniment. It cannot have come too soon. With the older generation of singers dying off, the advent of the first world war in 1914 might well have taken many of the young people, if male, that songs would have been passed onto.

These are a tiny sample of the songs we know Sharp collected in the Quantocks. For example from the people listed we know that he collected 22 songs from Charles Ash and 25 from Jane Gulliver. He also collected 11 songs from Mr James Lovell in Broomfield including “William Taylor” and 5 from Charles West in Broomfield. Fascinatingly he collected a number of songs from Romany people or those we know to have Romany connections, including Broomsquire families. For example Mrs Elizabeth Coles from Nether Stowey and Elizabeth Starkey and Eliza Wilkins of Over Stowey were both Palmers by maiden name, the most famous Broomsquire family, with strong Romany links. Mr Thomas Stanley from Spaxton gave Sharp a song that even contained Romany words. All in all over the years Sharp collected well over 100 songs from just the handful of villages in the Quantocks, ensuring that the musical heritage of its ordinary people has survived for us to continue singing today.