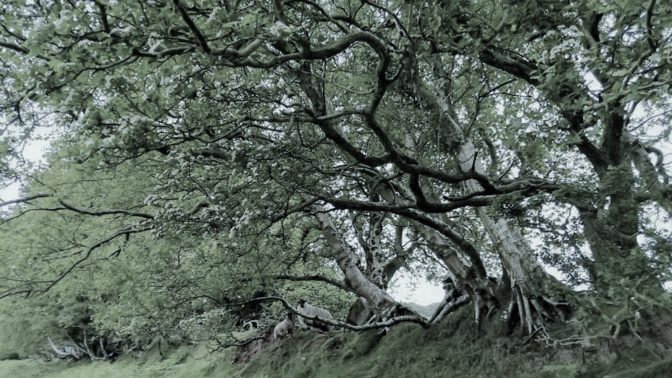 Up on the Quantock hills, a short walk through the woods and with far reaching views, lies Dowsborough Fort, one of the best known Quantock visitor locations and destination of many a walk and picnic. It is well known that Dowsborough is the remains of an Iron Age Hill Fort yet the history and archaeology of the area is not the only heritage associated with the spot. There are many a folk tale or legend, strange story and magical ghostly goings on, connected to the fort.

We often visit the fort during the day, but imagine going there at night. It is pitch black, the only lights the distant houses or the moon if it is full. Woods and the wilds are never silent at night, there are owls hooting and nocturnal mammals on their wanderings. Traffic and human noises are gone. Yet one of the most famous tales surrounding Dowsborough, involves noises as loud as a busy pub or family home, it involves the sound of a feast, the sound of arms clashing, of moments of celebration and of war.

Many of these stories, as with other locations on the Quantocks, involve the Danes.

Ruth Tongue in her book Somerset Folklore, refers to Dowsborough as having been a look out or summer camp, which was taken over by Danish sea robbers as their base whilst they preyed on local villages. The story goes that whilst staying at Dowsborough they kidnapped local women to live with them. They thought all was well, but the women had betrayed them, and one night during a feast the Danes were attacked and massacred. One of the ghost noises that people purport to hear is the clashing of weapons and wails of this battle. Likewise the feast that is thought to be heard could be the feast taking place, just before the moment of attack.

There is an interesting companion to this story – one of the kidnapped women rescued a Danish boy, as the attackers were killing not just the adult men. He became the sole Danish survivor and is said to haunt Dowsborough still, his sweet voice singing sadly, lamenting the loss of his compatriots at the fort that was once their home.

This particular story is said to be the inspiration of Wordsworth’s poem ‘A Fragment’, which he later renamed ‘The Danish Boy, A Fragment’. The poem starts with a description that whilst not specific enough to confirm as Dowsborough, could be so:

Between two sister moorland hills
There is a spot that seems to lie
Sacred to the flowerets of hills,
And sacred to the sky.

It focusses mainly on the boy and the landscape without making specific references to the traditional tale, though towards the end of the poem he does say:

From bloody deeds his thoughts are far;
And yet he warbles songs of war,
That seem like songs of love

This suggests that it is the same tale, and the war is likely to refer to the battle he was the sole survivor of, or more general Danish and Viking battles of the time.