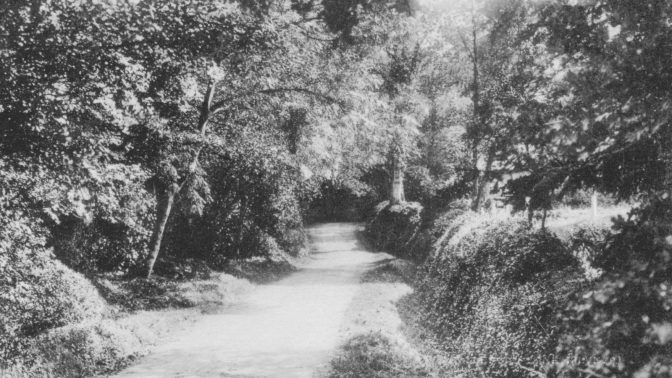 No exploration of the intangible folk history of any area of the UK would be quite complete without a mention of local witches, though there are not that many of note in the Quantocks, especially when compared to some areas of the country, with noted covens or documented witch trials. The Quantock witches are rather the tales of gossip and folklore, people, maybe real, become myth.

Some mentions of witches are simply connections with locations, such as the well down Pardlestone Lane, Kilve, where witches were said to meet. Other mentions concern people, but are clearly just prejudiced gossip about incomers to remote villages (one lady in Kingston St Mary was suspected purely because she was Irish!), eccentric people or people from different backgrounds such as gypsies. But there are some cases of individuals that pop up in different sources, suggesting that witch or not, they were people who were certainly believed to have some kind of power.

One well known witch was a woman called Harriet who lived at Keenthorne near Stogursey, possibly in the early 19th century (interesting for such a small place Keenthorne was also the location of the smithy who reputedly shooed the Devil’s horse). Ruth Tongue reports that she was blind and considered dangerous, but interestingly she spanned the witch spectrum in terms of niceness (white = good, grey = in between, though the ambivalence of grey witches made them sometimes more feared, and black = bad), depending on her mood. One woman reported how Harriet conjured the man she was in love with to her door, another that she helped a pregnant woman by getting the man to marry her and another that when a farmer went to blame her for his pig’s illness she was so offended that he ended up confused, in his own manure heap, covered in brambles, as if lost. Reportedly her eyes were also white when she did magic.

Another interesting witch story is retold in the diary of Susan, Countess of Malmesbury (1854-1935) who lived in Broomfield, Fyne Court being her childhood home. She recalls in her memoir “Village life in England” the “parish witch”, a woman she believed not to be a witch at all, but a poor woman who was the victim of superstitions that she felt had died out in more urban locations. This poor woman was constantly defended by Susan’s father, but still anything that went wrong, from an ill farm animal to a bad day at market, she was blamed for. She was said to have “overlooked” someone or “ill-wished” them. Things came to a head when her house was set on fire. This poor lady escaped but her daughter was injured and crippled for life. You would think that such a criminal act with such a tragic outcome would have ended the matter, but no, apparently the woman surviving unscathed was just further proof that she must be a witch. It was said a witch with the power to survive such an event, must have had demonic help. However after this she was left alone out of fear, rather than pity.

Susan also recounts a fascinating tale about slow worms that seems bizarre in terms of rural knowledge as she says locals were convinced they were snakes. They believed they were dangerous and therefore persecuted the poor lovely creatures. Susan was upset by this, as was her father, so he demonstrated they were harmless by letting her hold them in front of the villagers. How could they be dangerous if he would let his daughter hold them? However this did not quite have the desired effect and Susan says she feared if she had not been so well born and lived in Fyne Court that she too might have been accused of witchcraft, as the villagers were convinced it must be magic! One man asked her if she could teach him the “prayer” she had used to kill the poison! The word prayer was probably used deliberately here to make acceptable the white side of witchcraft, often accepted in the form of the village wise woman who would say a few words, a “prayer”, and cure many ills. Susan mentions that this practice was commonplace in the Quantocks at the time.

Susan’s recollections are particularly fascinating as being about real people she knew, rather than witches recorded in folklore, they bring to life ordinary people’s feelings about witchcraft in the late 19th century. The terrifying days of the witch trials of the 16th and 17th century might have been long over, but it shows that there was still real fear and suspicion about anyone who might be considered a witch. Witches were felt by many to be real.

If we go back to the times of the witch trials it is not surprising that tales abound everywhere. It was a terrifying time. There were some well known witch trials in Somerset, including at Bruton and just over into Devon a notorious one in Bideford. The smallest thing could get you accused – in Bideford a woman was condemned just because someone saw a cat, which they presumed to be her familiar, climb into her window! Therefore any wise woman would need to take great care. The use of the word prayer would be like a protection here, as in the past her knowledge could have led to her being condemned to death.

The hysteria that surrounded the witch trials could have also been the reason for some more fantastical witch reports, such as flying on broomsticks (the traditional besom brooms of Quantock crafts) or turning into toads. Familiars were also popular, a familiar being a demonic creature given to a witch by the devil on their initiation into witchcraft. However in many folk tales these creatures are more like simple companions, rather than demonic magical creatures, perhaps even invented to give the witch more credibility as the real thing. In oral history in the Quantocks it is hares that dominate as familiars – apparently in Combe Florey there were “gifted” people but if you crossed over to Kingston St Mary and West Bagborough there were an awful lot of hares. This was shorthand for black witches who would therefore have familiars or even be able to transform themselves.

There are other reports in the Quantocks of witch meeting places. Hestercombe apparently had a witches cave with a passage running to it from the manor!

As well as the reports of witches there are interesting folk traditions, which are there to counteract witchcraft and magic, that go back to pre witch trial times. For example the witches meeting place in Pardlestone Lane, Kilve, became surrounded by ash trees and therefore was no longer feared. This is because ash trees are seen as protective and many people would plant them to protect their houses and animals not just from witches, but also fairies and the Devil. People liked to carve staffs out of ash, as again this would protect them. Ash trees even had curative powers – a Quantock traditional remedy for ailing cattle was to bury a shrew in an ash tree! Another protective material is iron – fairies in particular hate it and it is the original reason that people put horseshoes on their doors. Whilst it became a symbol of good luck originally it was to protect their houses from dark powers.