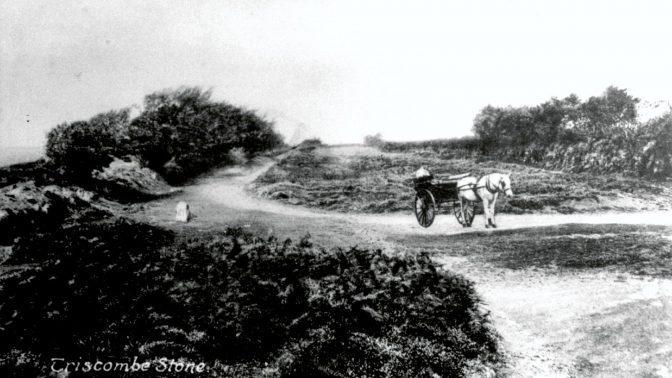 Triscombe Stone is a strange place. High up on the Quantocks, the modern car park for it is up a winding no-through woodland road, beautiful, yet giving you a feeling that you must be driving where you should not; that a mistake has been made, leading you into a strange realm, until you eventually arrive.

The stone itself is fairly ordinary looking, and to confuse things further, a place that should be full of stories is actually slightly hazy on the folklore front. There are some reports that if you sit on it and make a wish the wish will come true, but this seems more likely to be a relatively recent story using generic fairy lore rather than an ancient folktale.

There is one origin story that, like many tales associated with stones, involves a giant or the Devil. In this instance it is the Devil and the tale is that he was throwing a stone at a man that cheated him, but that it went so far that it landed in its current location, and so deep that only a small top part of it shows. But there are not many sources for this tale and it is not as well known as other Quantock folktales.

One folk detail about the stone that is present in a number of sources is how it is a meeting place for The Wild Hunt. This is interesting as it is also a key place on the route of the old Herepath, where paths and people, most likely, met. Indeed “tris” is a Celtic word meaning meet. Reports of seeing or hearing The Wild Hunt are common here and it is advised to avoid it at night due to how unlucky it is to witness The Wild Hunt.