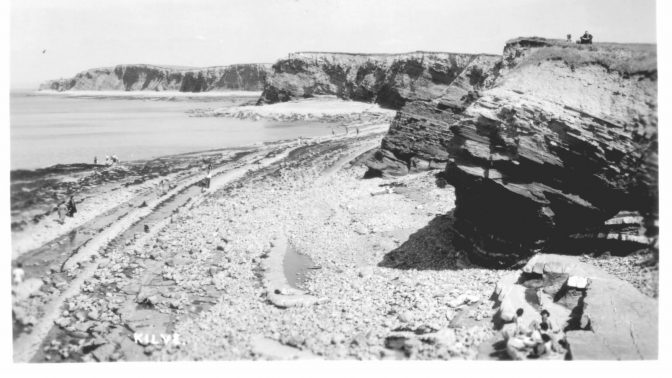 St Keyna is often associated with the town of Keynsham near Bristol, to which she gave her name, but her first foray into the west of England was via the Quantocks. Like St Decuman at Watchet, St Keyna was said to have floated over the sea from Wales, this time in the 5th century, where she landed at Kilve Beach.

According to a 14th century writer Capgrave, she was the daughter of Breganus who was Prince of Brecknockshire. She was a sworn virgin and whilst she had many admirers she showed no interest in any of them. As she grew older she decided to leave her native country to seek somewhere peaceful where she could live in religious contemplation.

The story of the foundation of Keynsham has her arriving where it now stands and asking a local prince if she might live there. He says she can, but that it is infested with snakes, other sources suggest that she wasn’t pre-warned and he directed her there on purpose. St Keyna then miraculously turned the snakes into stone, creating what we would know as ammonite fossils. Other St Keyna stories talk of snakes on her arrival at Kilve Beach and how she used a staff to turn them into stone. It seems logical to locate this part of the story at Kilve Beach as it is an area with many fossils, making it a logical explanation for ammonites at a time before the discovery of dinosaurs and a modern sense of evolution and history. Some versions of the story have some of the Keynsham snakes escaping to the Quantocks, so it could be that they were not there on her arrival at Kilve, but escaped there from Keynsham and belatedly turned to stone at the place where she had arrived. However she could have been unfortunate in terms of her meeting of snakes and they could have been at both locations! Or as some saints had special affinity for certain powers and animals, it could be that she was called to places where snakes were a problem.

It is also worth noting that the snakes could be a metaphor for the men who were always trying to make her sway from her vow of virginity, especially if the English prince directed her towards them on purpose rather than let her live peacefully alone without a husband. It is also interesting to think of the links with Medusa and classical mythology, her having hair of snakes and turning men to stone if they dared to look at her. Whilst the average person in rural Somerset would not have heard of the Greek Myths, many folktales and legends have fascinatingly similar counterparts in countries across Europe (The Wild Hunt, various giants etc), and whilst Keyna is a Catholic saint, in the early days of the Christian church many pre-Christian stories and beliefs wove their way into the then new religion. 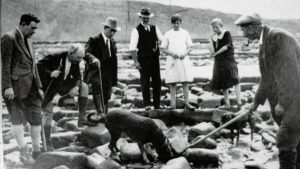 Kilve Beach is also associated with rural traditions, in this case eel glatting. People hunted eels at low tide, using dogs to sniff them out under stones, and large sticks to lift the stones and uncover the sometimes giant eels underneath. It was a great social event in the village when this happened.