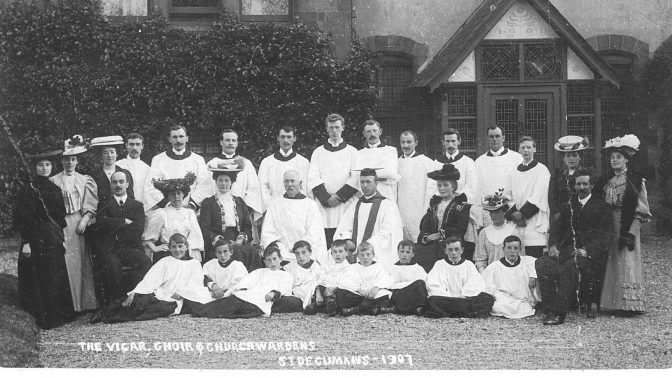 There are some unusual and deeply strange stories surrounding the local saints of the Quantocks. Perhaps the strangest of all is the story of St Decuman, who gives his name to the church just above Watchet and its holy well. His traditional festival day is 27th August.

St Decuman arrived in Watchet by floating across the water from Wales (as was the case with other saints in the area including St Keyna at Kilve). It is said that he floated either on his cloak or a hurdle, though some have suggested it was less miraculously a coracle. He was also not alone, but floated over with a cow, who gave him milk. On landing in Watchet he decided to set up a holy hermitage and he lived there quite peacefully for a number of years, alone but for his devoted pet cow. However the local pagans were not very happy at his arrival and eventually attacked him and cut off his head. Other versions of the story have him decapitated by an invading Dane.

This obviously should be where the story ends, and St Decuman becomes a martyr in the saintly tradition. However it does not. Rather than dying, St Decuman is said to have simply picked up his head and put it back on! This extraordinary incident is also the reason why there is said to be a holy well at this spot. There are two versions of its origin: one is that the well sprung up where his head fell, the other that he washed his severed head in a spring that was already there and this made it holy and a well was built. The version that tells of a Danish killer, has the Dane converting to Christianity at his amazement of the saint washing his head. It then has St Decuman, rather than putting his head back on, simply lying himself to rest with his washed head next to him, therefore peacefully ending his martyrdom. The consequent well, as is the case with many holy wells, is said to have healing properties because of its connection with the story. It is also said to cure scurvy, likely due to how it was used by sailors returning to Watchet.

This saintly story on its own is strange enough, but the Watchet area has another deeply strange local story with miraculous healing and coming back from the dead! This is a tale about a real local woman, Florence Wyndham who is commemorated in a brass plaque in St Decuman’s church. It is said that not long after her marriage Florence was struck down with a severe and mysterious illness and died.

She was laid to rest in her coffin in the church. The night before her funeral the sexton was supposed to watch her and he was mesmerised by the magnificent rings she wore on her fingers. He gazed at them, thinking what a waste it was to bury such fine jewels with the body, never to be seen again. After a while he gave in to to his greedy temptation and leant forward to pull the rings off her fingers and steal them, but as he did so Florence miraculously sat up! She started screaming and calling for help and the sexton ran off in terror. Quite extraordinarily Florence then went on to live a long and healthy life, outliving her husband by over twenty years. With the hindsight of modern science we can imagine that Florence had fallen into some kind of temporary coma – her family certainly swore this story was true, so it must have some logical explanation, but whatever the explanation is, the story has fallen into the realm of the folktale, with other versions evolving as is the folk nature, including a more grizzly version when someone tries to cut her fingers off! In this version the healing is even more miraculous… But it is also interesting that this strange healing takes place in St Decuman’s church, the site itself of a strange healing including a somewhat more drastic loss of body part!