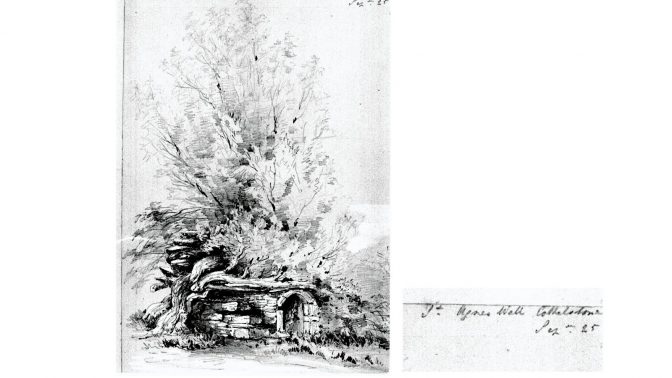 Not far from the site of Cothelstone Manor, just a short walk up the road back towards Cothelstone Hill, lying in an ordinary field is an extraordinary site – the holy well of St Agnes. It is a small stone building, water running past, mossy stones and encroaching weeds giving it the sense of a secret place abandoned to time. But it is also a place that is still visited and used by those in need in the way it was intended. If you look closely at the closed up entrance to the well you will see small offerings left, people still asking St Agnes for help in the modern day.

St Agnes is a saint associated with love and fertility in folk tradition. She is also venerated in the Catholic church, where she is also associated with girls and virginity having been martyred at 13 in Rome in the early 4th century. Traditionally women ask her for help in matters of the heart, in finding their husband or if they are having difficulty conceiving. Because of this there are many stories associated with the well and women said to have visited it.

Ruth Tongue tells a story of a single older woman who was embarrassed to be seen visiting the well, thinking it more the terrain of beautiful younger women. It was traditional to visit the well on St Agnes’ Eve (20th-21st January). It is said in both folk and Catholic tradition that if you do so, your future husband will be revealed. The day arrived, but the woman who wanted to visit the well became shy and didn’t want to bother St Agnes when she was so busy with young maidens looking for love, so she went to a different well in nearby Seven Wells Coombe and made her wish for a husband and children. St Agnes must have been listening as soon after she met a lovely man from Aisholt and all her wishes came true.

As well as being a holy well associated with St Agnes, the well is also reputedly a pixie well. Pixie wells and fairy wells are also traditionally healing or wishing places where offerings such as silver coins, pins and rags tied to trees are often left. Because of the association with pixies one has to be careful to be respectful of both creatures and their magic. But whether associated with magical creatures or saints it is logical that wells would have been places of healing – indeed at a time where disease was often caused by dirty water, the pure spring water of wells would have been automatically associated with health.

There are many wells in the Quantock area, as well as numerous springs linked to the streams and the steep coombes. Some of them, like St Agnes’ Well are still easy to visit, others have disappeared from common knowledge and we just have names, such as the Seven Wells Coombe of Ruth Tongue’s story, to give us clues. They often were linked to specific saints, or healed specific things, even if they had broader fairy or pixie links. For example there was a well in Nether Stowey that was both a fairy well and a healing well for those who were blind. Other wells are particularly connected to eye troubles (Quantock Barn, Wick Moor, Dunster), or even more specific than that. For example there was a well in Stogumber said to cure Leprosy and St Decuman’s near Watchet, whilst a general healing well, also gained a reputation for healing scurvy due to its use by returning seamen.

There are also wells that are reputed to be dangerous. These are obviously not associated with saints, and they tend not to be pixie or fairy wells, but rather, unsurprisingly, connected with witchcraft and/or the devil. For example near Bishops Lydeard church there was a well called The Devil’s Whispering Well, where curses could be whispered into the depths. Down a dark lane at Pardlestone in Kilve there was said to be a witches well, but it ceased to be dreaded after protective ash trees grew around it. Others are dangerous as they are uncanny – disappear in weird ways or even turn objects to stone!