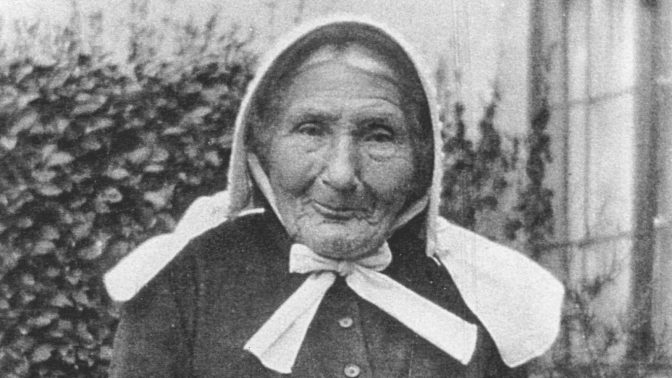 History tends to focus on famous individuals and forget the extraordinary people who affect their community without obtaining fame. Below are a few of these from the Quantock area’s past, key people in local history who, in their own way, contributed to the intangible heritage of their communities. Of course there are many more, but hopefully this small sample will act as testament to how these everyday life stories should be valued as much as the more dramatic historical ones.

The below photograph, kindly reprinted with the permission of the Friends of the Quantocks (and featuring in their publication Quantock Miscellany), shows Mary Anne Gunningham. Mary Anne was from Kingston St Mary and started work at the age of 12 in the fields. She continued with field work even after having 12 children, fitting it around their school day. But the work she is most remembered for is her job as a telegram messenger for the Post Office.

This photo was taken in 1918 outside the Kingston St Mary Post Office which was then at Corner Brook at the bottom of Lodes Lane. She was still working as as a telegram messenger well into her 80s! During all her years of local service she would walk her routes, stretching as far from Kingston as Cothelstone and Broomfield. She must have known those country lanes intimately, striding swiftly to get important messages through, at a time when there would be no telephones in rural locations. If a telegram arrived the postmistress would blow on a whistle to summon her – a short whistle meant a short journey, a longer whistle meant a long one. Mary Anne was proud of her work saying “I have never had a mistake to trouble me in the course of my Post Office work, nor has any complaint ever been made against me.”

Katherine Sorby was the sister of the Rev John Sorby and lived with him in Enmore where he was Rector in the early twentieth century. She is particularly interesting in her involvement with folk heritage and also assisting Cecil Sharp in his song collecting visits to the Quantocks. She went with Sharp on many of his visits to villages including Broomfield and Over Stowey. There is an interesting entry in her autograph book where Sharp has handwritten some musical notation before signing.

Katherine’s brother later became vicar of Over Stowey and Katherine continued her interest in music and folk traditions here. She conducted the Over Stowey Singers group and taught Morris dancing. The latter is particularly interesting, as at the time Sharp was also fascinated by Morris and collecting folk dances as well as music. However traditional Morris was largely a Cotswold affair, so it could be that Katherine learned the steps from him in order to keep the tradition alive and to make it popular in the Quantocks. It is also interesting that she was a woman, as Morris dancing has had many controversies over the years as to whether women should dance. However Sharp, whilst admitting it was a traditionally male dance, had no problem with women taking part and teaching it, so along with more famous female teachers in London, Katherine was key to Morris being alive and well for a new generation in the Quantocks.

There are other fascinating lesser known people who spent time in the Quantocks. For example Olive Willis, along with her sister Dorothy, well known educationalist and founder and headteacher of Down House school with its many famous artistic alumni. They had a cottage at Aisholt, which Olive in her old age said was her prized possession. The poet and dramatist, friend of CS Lewis and woman on the edge of the Inklings Anne Ridler, also spent much time there. She also wrote Olive’s biography.

There are also notable local characters who left an interesting legacy in their memoirs. From Susan Countess of Malmesbury’s tales of growing up at Fyne Court (see witches article), to the Rev William Holland of Nether Stowey whose diaries, published as Paupers and Pig Killers, give us a fascinating insight to ordinary village life – often full of more poverty and crime than one would imagine, offering an interesting alternative view to the bucolic nostalgia with which people often see the rural past.