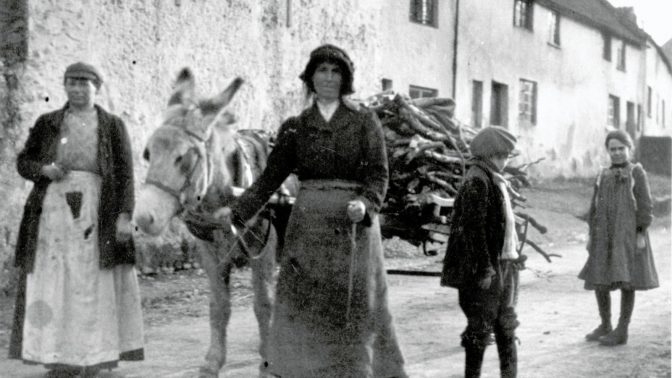 Today we are used to seeing the Quantock Hills as a landscape of pleasure and wildlife, of days out walking or exploring the trees. We might think of farming around the villages and fields at the bottom of the hills, but there are other ways it was a working landscape, traditional crafts and industries that are now largely forgotten. Yet they are an integral part of the human heritage of the Quantocks, the stories of the everyday people who have lived and worked with this land for centuries. One of the most interesting examples of these are the Broomsquires.

A Broomsquire, in simple terms, is someone who makes a besom broom (a traditional broom shape close to what many of us would see as a witch’s broomstick today). The word besom itself comes from the Old English besma, meaning bundle of twigs. Besom brooms were made by hand. In the days before mass manufacture and imported or widely sourced materials, besom broom making was an industry that sprang up based on the materials that could be gathered and utilised locally. In the case of broom making on the Quantock Hills this would usually mean a long handle made of hazel or willow. Traditionally besom broom heads were made from birch twigs, but depending on the area of the country where they were made this could vary – for example some areas even used gathered heather, though this was not typical in the Quantocks. The best brooms of birch used seasoned coppiced wood that was therefore supple and not too brittle for sweeping, though the quality of broom depended on what was available and who had made it.

The twigs that formed the sweeping head of the broom were skilfully gathered around the handle, with longer rougher twigs in the middle and shorter smoother twigs around them, before being tied in place with a supple wood such as willow (a modern besom broom might use wire).

Quantock brooms were well known throughout the West Country, interestingly not so much by those that bought them, but by the travelling sellers, the pedlars that would buy the brooms from the Broomsquires and take away with them to sell all over Somerset as well as further afield, such as to Wiltshire, Dorset and Devon. These pedlars were sometimes of the Romany people and would set up camp, often in Buncombe woods and travel across the hills to Bincombe near Nether Stowey, where a well known family of Broomsquires lived: the Palmers.

The Palmers were an interesting family. Whilst they themselves had a permanent base in Bincombe, (Broomsquires Cottage, still standing today, is where they lived), they were a Romany family through marriage, stretching back to when a farmer’s son from Surrey married a Romany girl named Lydia or Liti Smith. It is unclear whether the villagers knew this, and not all Broomsquires were Romany, but it is interesting, especially in terms of song collecting, as if one looks closely at the maiden names of many of the women that Cecil Sharp collected songs in the area from, they were originally Palmers, suggesting a fascinating Romany connection to many of our traditional tunes. Descendants of the Palmers, including among some Romany families, still live in the Quantock area today. Local genealogy and history enthusiast Cathay Birch, has done some fascinating research into the Palmer family tree, and confirmed the Romany connections to the Broomsquires and her research makes this first link between Robert and Liti, descendents of whose ended up in the Quantocks.

There are interesting historical descriptions of the Broomsquires, including in the somewhat esoteric diaries of the Rev William Holland “Paupers and Pig Killers”, which covers his time in Nether and Over Stowey between 1799 and 1818. He refers to both the Broomsquires in general, almost as if they were one large clan to be lumped together, as well as to a Joseph Palmer as an individual. He was very suspicious of them as they were a rough lot and tended not to come to church, unless it was for a funeral or celebration when they turned out in large numbers. There are also nineteenth century reports of Broomsquires getting into trouble for stealing materials, rather than gathering them legally, suggesting that not all Broomsquires made their brooms from seasoned and legitimately coppiced wood. This would of course affect the quality of the broom, but the fame of Quantock besom brooms and how pedlars from further afield would come to buy them in the Bincombe/Nether Stowey area, suggests that in general this was not the case.

We cannot know for sure whether the Broomsquires were aware of certain folk traditions and sayings, although we can presume that many country people were. However it is interesting that traditional besom brooms are made of birch, as in folklore and pagan traditions birch twigs were used ritually, especially at New Year, in order to sweep away the spirits of the departing year. This ritual cleansing of spirit might have given them an extra psychological potency when doing the practical cleaning of the home. Even sceptical church going country families often held on to folk superstition, and whilst they may not have overtly believed they were sweeping away spirits, there might have been a reassurance in a broom head being made of birch rather than other twigs.

The woods also provided income for other rural people. These included bark strippers, people who would strip trees of their bark to be used in local tanneries. There were also charcoal makers. 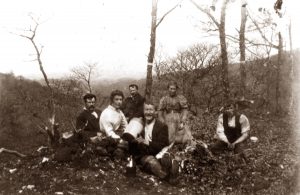