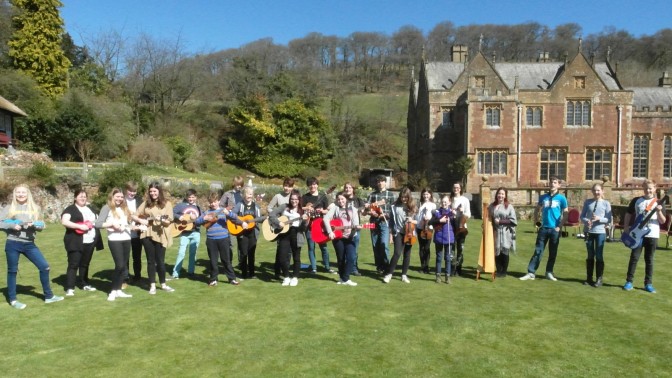 The Halsway Young Folk music programme is for young people to explore folk arts, experiment, find their own sound and fuse different genres of music. For over ten years it has helped inspire young musicians to study music at a higher level, and to pursue careers as musicians and within related fields.

We work with young people to provide interactive and engaging experiences to ignite and support their interest in folk music and dance. From residential music workshops, visits to schools to professional development for aspiring musicians we offer something for all ages and have access to many experienced and committed artists and tutors.

We have 4 residential opportunities in 2022 catering for young musicians aged 8 through to 21. these take place in April, July and August as follows;

An introduction to folk for young people aged 12-16. Prior experience – as either a singer or musician – is essential, but it’s ok if you’re new to folk. The week culminates in an informal performance to friends and family.

For ages 7-11. Everyone welcome, join us for fun with folk. This is a great introduction to playing and learning about folk music working with supportive and experienced artists.

Regular tutor Ford Collier (The Drystones) will be back, alongside Becki Driscoll and Kerrie Seymour.

For ages 12 – 18. You’ll have been on a course with us before or have some previous knowledge of folk. You will work with a team of exciting professional folk musicians to produce a performance piece for Sidmouth Folk Week.

For ages 16 – 21. You’ll be a competent musician or singer, keen to work at a higher level. You will have access to industry professionals, advice and skills development opportunity. This is the course to do if you have aspirations of being a professional musician or educator.

More about the Courses

In each course, the participants stay at the manor and operate as a company: taking warm ups together, developing technique, learning repertoire and creating contemporary interpretations of traditional material. They live, work and play together, with opportunities for informal jams and social gatherings to enrich their understanding of the folk arts, and to make friends and have fun! 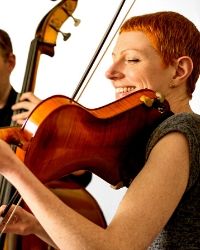 Becki is a musician, singer, composer and educator with many years’ experience. Based in the heart of the West Country she has a deep knowledge on love of our local – and wider – folk traditions.

Becki leads educational projects and workshops for festivals and specialist courses, ranging from beginners fiddle sessions, to mixed-instrument folk orchestras for all ages. She leads the prestigious English Fiddle Weekend at Halsway (together with Nick Wyke), and is an Associate Artist for Wren trust for whom she has led numerous community music projects including the Folk Orchestra of North Devon, the Fiddle Orchestra of Devon, regular music groups with children and young people, and a specialist early years project she developed with Bideford Bay Children’s Centre.

“folk music at its best” – The Living Tradition

Becki is well known for her celebrated musical partnership with Nick Wyke; two of the UK’s finest fiddle-players, together they give a playful and innovative take on English traditional music and song. They first collaborated as a fiddle duo on a busking trip around Spain and Portugal, and in the years since have worked with some of the leading lights of the English folk scene, always pushing the boundaries and developing new and inventive music. The duo’s compositions and interpretations of traditional songs are influenced by a wide range of musical cultures: “We are inspired by the people we meet and the places we’ve been. We like the idea of a global approach to the English tradition.” 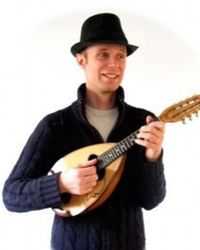 He predominantly works with traditional English music, steeped in the traditions of Devon and Dartmoor. He is also blues and classical musician, and a Dartmoor Step Dance Champion!

As a multi-instrumentalist, Matt plays mandolin, fiddle, mandola, banjos, piano and also sings. He performs solo and in bands including Gadarene and A New Vintage ceilidh band, and regularly deps in other line-ups. He’s also a singer and choir-leader.

Matt’s extensive teaching experience includes working in community and festival settings with all ages and abilities. He has a relaxed, fun and accessible approach to learning, tailored very much to the group. He has a broad expertise embracing mixed-instrument ensembles, choral and voice work, instrument specific tuition (mandolin, fiddle, banjo), and also step dancing. 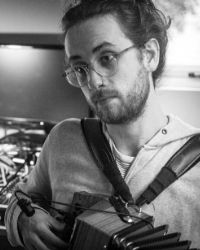 Widely regarded as one of the best players of English traditional folk, Archie has worked as a session musician for some of the UK’s top folk acts (Cara Dillon, Eliza Carthy, Blair Dunlop), as well as performing with the trio, ‘Moore, Moss, Rutter’ – The outfit which saw him receive the coveted BBC Radio 2 Young Folk Award in 2011.

With a contemporary approach to composition and arrangement Archie has developed a style of playing that draws as much influence from the tradition as it does modern popular music. He is currently seen to perform with: ‘Tom Moore & Archie Moss’, ‘Sam Kelly & the Lost Boys’ and ‘False Lights’.

His engaging teaching style comes from a wealth of experience in his position as senior lecturer in ‘Folk Music’ at Leeds College of Music and teaching on the National Youth Folk Ensemble. 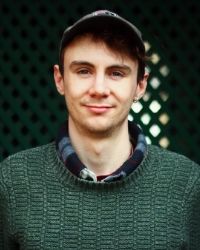 Ford Collier is a Radio 2 Folk Award Nominated multi-instrumentalist, specialising in folk fusion. He plays low whistle, guitar, and percussion, and draws on a wealth of traditional Irish tunes, his 8 years of experience as an accompanist, and knowledge of the rhythmic language of Indian classical music to broaden his roots in UK folk. Ford regularly tours the UK and has played festivals including Glastonbury with his two bands; global folk collective Mishra with Kate Griffin, and electrified-folk duo The Drystones with Alex Garden.

Some of Ford’s first teaching experience came from Halsway Manor, where he participated in courses as a teenager and eventually became a tutor. He has since delivered a series of workshops in primary schools on local folklore in collaboration with Historic England and Halsway Manor, begun work as a peripatetic teacher at schools in Sheffield and taught one-to-one lessons privately.

Ford has been a core tutor on this course since it began three years ago; he has also himself been a participant on Young Halsway courses when he was younger! 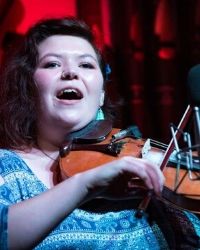 Hannah began playing the fiddle at the age of 12, and her love of folk music spiralled as soon as she could play it. She recorded her first folk CD at the tender age of 13 as a duet with her brother Alex, before starting a ceilidh band together with Alex and pals Jon and Penny Dyer; ‘Dyer:Cumming’s’ are still going strong today!

Hannah currently performs as a solo singer/musician, and with bands Dyer: Cumming’s, and the Klezbians – a 12-piece klezmer band born out of a love of Jewish Gypsy music discovered while studying music at Falmouth University. She has a busy teaching schedule including private violin tuition for adults and children, leading Fiddlin’ Folk children’s folk orchestra and Sherbourne Folk Band, in addition to working within primary and secondary schools.

Hannah just wants to be able to play, share her music, and encourage others to try it for themselves! Hannah is joining us for the first time as a Young Halsway tutor this year – and she’s even more excited than we are! 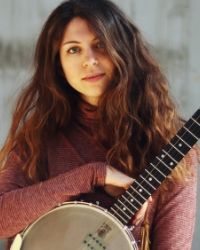 Kate is a clawhammer banjo player, vocalist and composer rapidly emerging on the UK folk and world scene. Described as “one of the top banjo players in the country” by virtuoso Dan Walsh, her innovative banjo style combines both traditional UK and American folk, whilst also placing the banjo in a contemporary setting. In 2017 Kate Griffin and Ford Collier formed award winning global folk collective Mishra, fusing Indian classical with UK and American folk music, with their debut album being released autumn 2019. Her solo projects include the Wayside Tales EP which transformed stories from her home village in Gloucestershire into reflective compositions; participating in a cross-cultural collaborative project Virtual Migrants; and touring with theatre company Pif-Paf.

Whilst studying at the University of Sheffield Kate has led numerous workshops with the university’s folk ensemble and undergraduate students, alongside teaching instrumental lessons in piano, guitar and banjo for 4 years. She has also led workshops at folk festivals and with refugee groups in Sheffield. 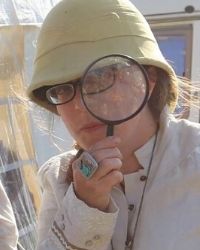 Kerrie is a community artist, youth theatre director and project manager with a background in Social Work, specializing in Youth, Education and Children’s Residential care.

Working extensively with schools, community groups and a range of support services Kerrie has delivered countless projects from small theatre performances to large scale outdoor events. She strives to be part of creating fresh, innovative, thought provoking and exciting work that can motivate, inspire, and engage participants and audiences. At Halsway she’ll be leading fun team-building and confidence-boosting games and creative activities to complement the musical tuition, whilst making sure each young person feels included and supported during their stay.