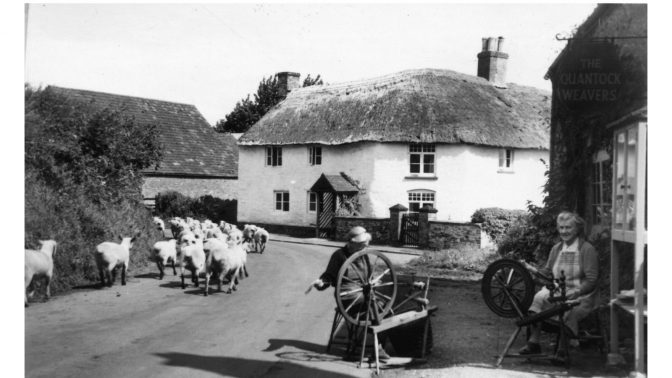 In the Old Forge at Plainsfield,  Over Stowey two spinners, dyers and weavers of wool, Norah Biddulph and Gladys Dickson set up in business together forming The Quantock Weavers.

Both ladies were born in 1885 into in high society of country houses and London courtly life – but both had seen their family life and personal security crash during the 1920s. They found friendship in each other as independent women later in life and in 1932 at the age of 47 set up business in The Old Forge – a rambling sandstone house that was once the forge of Quantock Lodge.  Here they made a living bottled fruit and fruit juice, made pickles, canned tomatoes, and bottled whortleberries in syrup selling to the likes of Fortnum and Mason and Harrods. They also bought wool from local farms and dyed it with colours created from natural dyes using the heather, gorse, broom, lichen and bracken found in abundance in the Quantock Hills.

The colours they used were in harmony with the historic tapestries and fabrics of stately homes and their fabrics became sought after throughout Somerset and further a field. A blue linen cloth used on high alter at Wells Cathedral was made by the pair.  Norah was already a proficient weaver having studied the art in Sweden, and Glady bought her spinning wheel from Wells. On a sunny day the two would sit outside spinning wool together in the lane outside the Forge and welcoming customers and visitors.

Their ability to match colours using plant dyes was remarkable – people would send coloured stones and gems from all over the world to them to reproduce in texture, pattern and colour and the museum in Taunton holds a collection of these stones and fabrics.

The legacy of the Quantock Weavers continues today as their pair started the Somerset Guild of Weavers, Spinners and Dyers which still meets monthly in Hatch Beauchamp. Norah and Gladys were also founder members of Bridgwater Arts Centre.