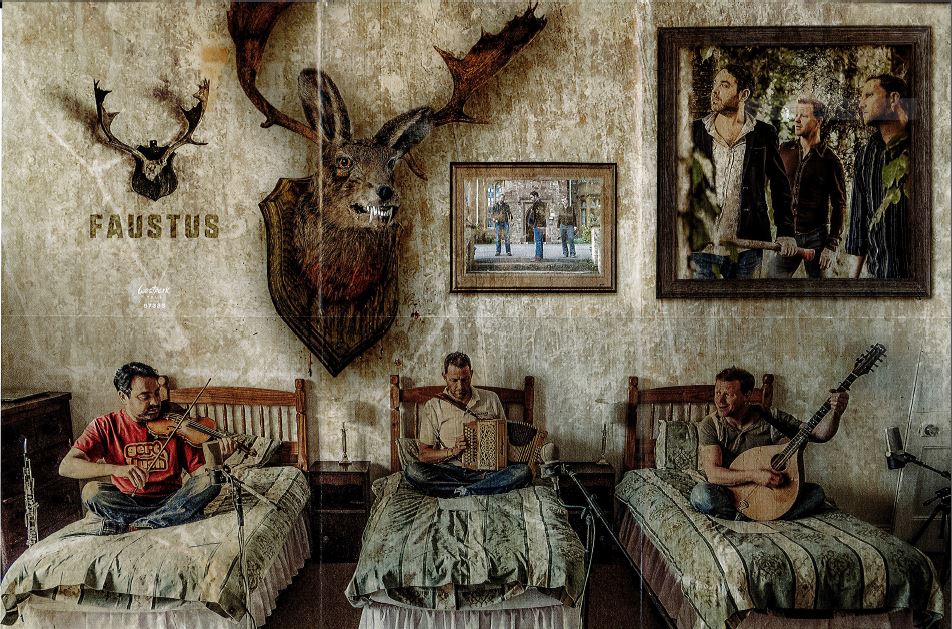 ‘’One of Britain’s outstanding folk bands.’ **** The Guardian

‘The concept?  To rescue contemporary folk from the curse of feyness… Bloke-folk!… Fans of Led Zep III should take a thoughtful interest.’ **** Independent on Sunday

Four years after their critically-acclaimed album ‘Broken Down Gentlemen’, Faustus, the pioneering ‘bloke folk’ trio return with their third release – ‘Death and Other Animals’. Here they tackle, head-on, subjects from the Dance of Death to the plight of the common man, sand-swallowed ships to mythical black dogs.

During 2016 the band have been Artists in Residence at Halsway Manor, National Centre for the Folk Arts, in the Quantock Hills of Somerset, where they have had unlimited access to the Manor’s extensive library. Material found therein has shaped this album which includes four songs unique to Halsway’s little-known Ruth Tongue archive. Halsway has been omnipresent throughout the process as the band not only researched material but recorded the album in the Manor.

In addition to traditional music from the English canon, in which Faustus excel, they present a song by UK legend, Bill Caddick, and have set a  poem by award-winning  Olivia McCannon, to new music. Original melodies sit alongside old words (some from manuscripts lurking in a secret filing cabinet, still never published) and newly composed instrumentals are included on the album as well.