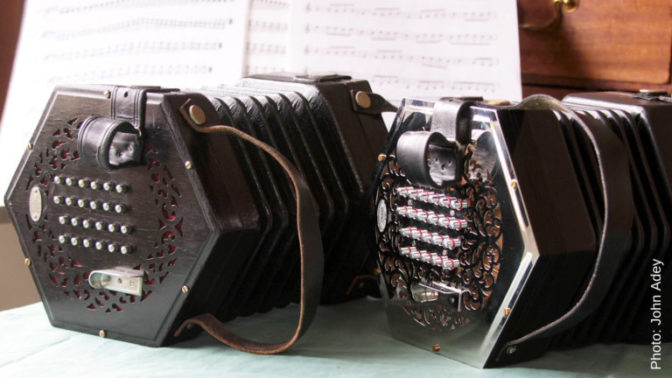 This course is now fully booked.

We anticipate that accommodation will be at a premium for this event; please consider sharing a room with friends, booking a bed in a shared dorm, or bringing a campervan/camping if you're an outdoor type. Not only will you save yourself some cash, but it will mean that more people can join the weekend!

This course is now fully booked.

You can still register your interest for next year!

We’re delighted to welcome West Country Concertina Players to Halsway Manor to host a packed concertina workshop weekend for intermediate / advanced level players of all systems. You do not need to be a member of WCCP to come (though you might consider joining them – it’s only £10 annually); the weekend is open to all. Though this is a popular weekend and priority will be given to WCCP members through an opportunity to book early.

Workshop strands are as follows, you will need to let us know which group you’d like to join when booking:

An essential part of the team, ‘The Concertina Tinker‘ Dave Elliott will be in attendance throughout the weekend offering ‘Concertina A&E’ and practical advice and expertise regarding maintenance.

There will be time to relax in the comfort of Halsway Manor, with evening playing sessions in the bar, plus an informal tutor’s concert on the Saturday evening. There’s also the option to stay an extra night and book for Sunday supper, B&B, the perfect time to relax and unwind after a busy weekend of music and socialising.

A selection of music for the Duet, Anglo and English workshops and all music for those opting for Band will be made available ahead of the weekend. Band music will be part and instrument specific.

A note re. Band Workshop: Claire will need to know what instruments you will be bringing and whether you would be willing to lend or play other instruments within the band workshop. Please complete this online form when you have made your booking. Band balance only works if enough people play lower pitch instruments. All players must be prepared to play at least one line on a lower pitched instrument. The timetable will allow for band players to attend some other workshops too but it is anticipated that band will be your first priority.

WCCP offer a course for all abilities from beginners upwards in October each year – see website for details.

This Halsway course however is aimed at players at a more advanced level; you’ll be a competent player, fluent in your chosen system and ready to develop technique and repertoire in a group workshop environment. We regret that beginners / post beginners cannot be accommodated on this course.

You do not need to be a member of WCCP to come, but we are opening bookings early for WCCP members. The weekend will be advertised to all from 1 June, so WCCP members are advised to book before this date to guarantee their place!

Other tutors for the weekend are:

Brian Peters  A true all-rounder Brian is on the one hand a passionate singer and on the other a multi-instrumentalist acknowledged as one of England’s leading exponents of the anglo concertina and melodeon (button accordion). Having begun his career in the folk clubs of England, he’s taken his music to stages all over the world, touring regularly in America, Europe and Australia. US folk music magazine Dirty Linen described him as “one of the very best performers in the field of English traditional song and music”.

Tim Laycock has been playing and singing at folk clubs and festivals for over 25 years using mainly the concertina, melodeon or guitar as accompaniment. He has a vast repertoire of traditional songs and his own compositions are inspired by his native county Dorset, giving them a West Country flavour.

Sandra Kerr’s long and distinguished career in folk needs no introduction.  She is a multi-instrumentalist and performer playing guitar, dulcimer, autoharp and the English concertina. She is a popular tutor of the concertina at gatherings including the ‘Swaledale Squeeze’ and ‘Concertinas At Whitney’, and twice at the National Folk Festival Easter School in Canberra. She also teaches on Newcastle University’s degree course in Folk and Traditional Music.

Claire Wren has been running concertina band workshops for over 25 years. She has written extensively for concertina band and smaller ensembles. Claire is the Musical Director of Banding Together and also directs her own concertina band “J25”. Claire’s favourite pastime is rehearsal!