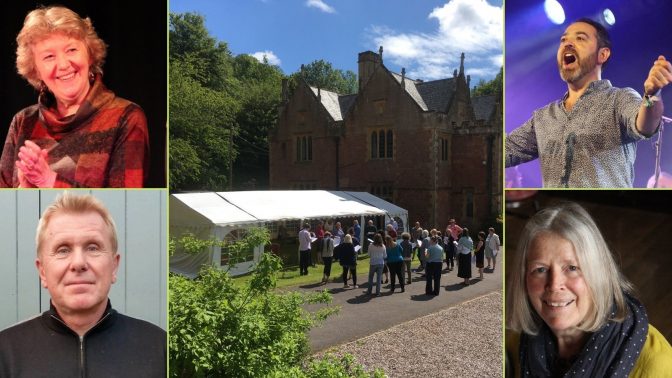 A weekend of joyous singing led by Carolyn Robson, Paul Sartin and Lester Simpson. Drawing on modern as well as traditional material, we will be looking at arranging and performance for unaccompanied voices, helping you to get the best out of your voice, and to guide you to a better performance.  We will be using songs from a variety of sources and styles, but the main focus would be on harmony singing and celebrating raising lots of voices together, and early Autumn is a lovely time to get outside and sing too!

Singers of all levels of experience and ability are welcome. You won’t be needing to sing on your own during workshops, although those who want to lead songs in the evenings will be very welcome to do so. Bring instruments too for evening sessions.

Carolyn Robson is a singer and choir conductor based in SW Surrey. She was a member of the renowned a cappella trio Craig Morgan Robson. Carolyn currently runs three community choirs and a chamber choir in Hampshire. She has also worked extensively with other community choirs and has led workshops and masterclasses at numerous UK folk festivals, including Sidmouth, Whitby and Chippenham. Her workshops include songs from the British tradition and further afield. She gives advice on technique, voice production, breath control, posture, projection and interpretation and how to sing with confidence!