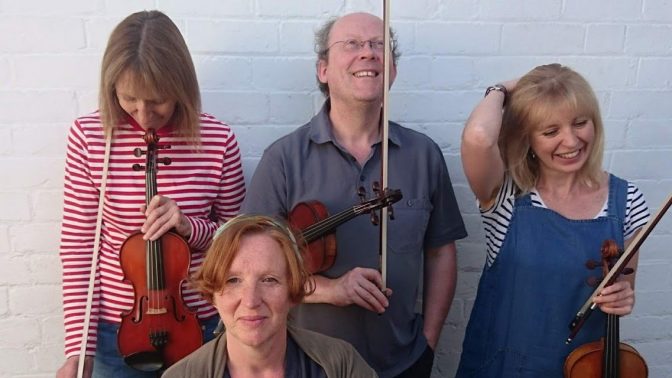 This course has been cancelled due to the ongoing COVID-19 pandemic. We will provisionally transfer exiting booking to our 2022 event (click here for details). Please contact us to transfer to an alternative event, or to arrange a refund. Thank you.

Led by Andrew Swaine with music from Boldwood. The Halsway Playford Weekend is always a stimulating and enjoyable experience!

The dance will be led by Andrew Swaine who is an experienced caller for most genres of English country dancing, including ceilidh, American contra, Playford (early country dancing, starting with the publications of John Playford 1651 onwards) and modern country dances at all levels written since the revival in the early 20th century.

Expect a varied and joyful programme of workshops and social dancing, aimed at interpreting the dances for a modern audience with enthusiasm and enjoyment, whilst also setting the dances in historical context and referring back to the original sources.

Andrew Swaine has been dancing since he was small. He’s been calling and teaching workshops, mostly of various forms of country dancing, since he was a student in the 1990s and is keen to share his love of dance. He has a well researched Playford portfolio and is an experienced caller for most genres of English country dancing, including ceilidh, American contra, Playford (early country dancing, starting with the publications of John Playford 1651 onwards) and modern country dances at all levels written since the revival in the early 20th century. As well as leading “Playford in the Pub” dances in his home town of Sheffield. Outside of calling is also an accordion player, mostly for morris dancing with Boggart’s Breakfast in Sheffield and Gog Magog Molly in Cambridge and very occasionally play bass guitar with Cambridge-based ceilidh band Moon Carrot.

Since the release of their first album ‘Feet Don’t Fail Me Now’ in 2007, Boldwood have been at the forefront of research into music from little known collections and sources including manuscripts, notebooks and dance fans. Equally happy in concert or playing for dancing, they have appeared at festivals and concert series in England and France. Boldwood’s latest album ‘Glory Of The West’ was released in March 2018 on Hobgoblin Records.