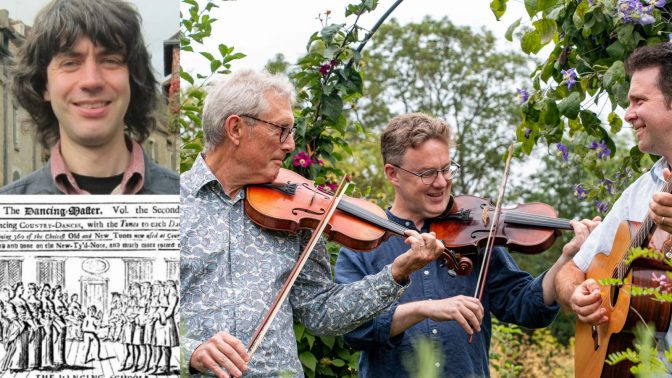 The Halsway Playford Weekend is always a stimulating and enjoyable experience, and we are DELIGHTED to welcome dancing master Andrew Swaine and the wonderful band The Warleggan Village Band to lead the 2023 event.

An extremely brief history of Playford, in Andrew’s words: “John Playford was a publisher in the mid-17th century who published a lot of “country dances” which were being danced in the English Inns of Court at the time. It’s commonly believed that that they were initially dances for light relief based on what the common folk were doing, but dancing masters got involved and many of the dances are quite elaborate! They evolved considerably when Charles II came back from exile and country dancing became very popular throughout the nation and much of Western Europe, declining in the early 19th century. At the beginning of the 20th century Cecil Sharp, reviving interest in all things traditionally English, reinterpreted and and taught these dances.”

Andrew likes to promotes a relatively lively and accessible style of Playford dancing, aiming to rediscover what made these dances fun in the first place. Expect a varied and joyful programme of workshops and social dancing, aimed at interpreting the dances for a modern audience with enthusiasm and enjoyment, whilst also setting the dances in historical context and referring back to the original sources.

The course is aimed at those with some experience of dance, although no specific experience of the Playford dances is necessary. Andrew is used to working across all levels, meaning he is well placed to include and encourage more novice dancers, whilst also providing enjoyable challenges for more experienced dancers.

Andrew Swaine has been dancing since he was small. He’s been calling and teaching workshops since he was a student in the 1990s and is keen to share his love of dance. He has a well researched Playford portfolio and is an experienced caller for most genres of English country dancing, including ceilidh, American contra, Playford (early country dancing, starting with the publications of John Playford 1651 onwards) and modern country dances at all levels written since the revival in the early 20th century. As well as leading “Playford in the Pub” dances in his home town of Sheffield. Outside of calling Andrew is an accordion player, for morris dancing with Boggart’s Breakfast in Sheffield and Gog Magog Molly in Cambridge and in a Balfolk duo with clarinetist Jo Veal.

The Warleggan Village Band (Richard Heacock, Matthew Coatsworth and Chris Green) was first convened in 2014 to play for the dance sequences in BBC TV’s “Poldark” and has since been regular favourites at Halsway Manor for “Dances of Poldark” weekends. With further appearances in the hugely successful Netflix series “Bridgerton”, the band is renowned for its exceptionally inventive playing of English country dance music from Playford to Regency times, bringing joy and energy to dancers and listeners alike. They are much in demand for Regency dances throughout the UK.

Matthew Coatsworth (violin, concertina) played in Boldwood for many years and researched and published the four Boldwood Dancing Master tune books. He also plays in Oxford Sinfonia and with Oxford harpist Steph West.

Chris Green (guitar, piano) is a regular musician at Shakespeare’s Globe Theatre. He also tours as a solo artist, and as one half of GreenMatthews with his partner Sophie Matthews.

Richard Heacock (violin) also played in Boldwood, producing their first CD ‘Feet, Don’t Fail Me Now.’ He now plays at European maritime festivals with The Sea Band and is a regular musician at Halsway.