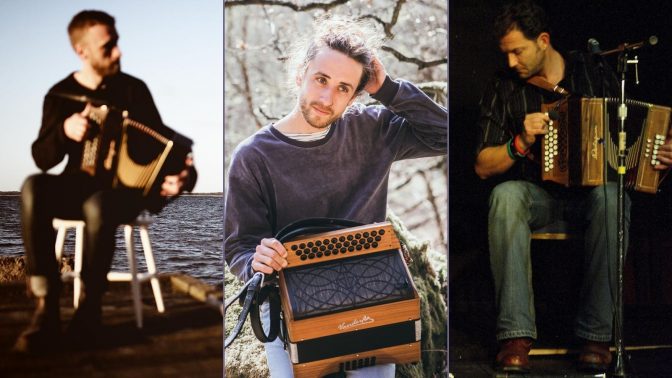 Our DG Weekends at Halsway are hugely popular and book-up well in advance. We’re delighted to be welcoming Saul Rose and Archie Churchill-Moss back to the team, along with Hartwin Dhoore (Belgium/Estonia)! We hope that box-doctor Theo Gibb will be available to join us for the weekend, to offer informal advice about tuning, maintenance, repairs and improvements – and to better help you understand your box and its potential – watch this space!

This weekend is not aimed at total beginners*. You’ll need to have a basic grasp of your instrument – as a guide you should at least be able to play simple tunes with both hands together – with plenty to inspire and challenge more experienced and accomplished musicians. There will be a busy programme of workshops (each group will spend time with each tutor) plus time to socialise and take part in informal sessions plus an informal tutor’s concert on the Saturday evening.

Players of the D/G melodeon (diatonic button accordion) of all levels except complete beginners*. You’ll need a DG melodeon (2 row, 8 bass as a minimum). The course is taught predominantly by ear at all levels.

We’ll be asking you when you book to pre-select the group which best suits your current ability level so that we can keep group sizes manageable. If – come the weekend – you feel you’re in the wrong place, there will be the possibility to move group at the tutors’ discretion. The three tutors will work with all three groups, allowing you the experience of learning from each of them.

Please make sure you read our Halsway Workshop Levels guide, to help you choose the most appropriate group.

Music is not usually sent out in advance for this course. Teaching is generally by ear with scores available for you to take away. All tutors are happy for you to make video or sound recordings for your own use, so bring a recording device as well as a  notepad and pen!

Box Advice: We will likely include a formal chat / demo session with Theo at some point in the weekend but additionally Theo will be available to chat to at breaktimes / evenings to offer individual advice and answer your questions. He won’t be offering a full-on, free repair service! But he’ll help with quick fixes and offer advice on any bigger issues which might need addressing.

Saul Rose has to be one of the most experienced and hard-working box players (and singers) on the UK folk scene. Saul was a long-time member of Waterson:Carthy, winning two BBC Radio 2 Folk Awards with ‘Broken Ground’ and forming a duo with Eliza Carthy with whom he has worked with extensively ever since. More recently Saul has joined Whapweasel, played in Ruth Notman’s band, and formed duos with James Delarre (of Mawkin) and with Maclaine Colston. He is one third of Faustus (with Benji Kirkpatrick & Paul Sartin) and is a founder member of folk big band Eliza Carthy and The Wayward Band. He has played on numerous albums as a guest, including Jackie Oates’ album ‘Hyperboreans’, Norma Waterson and Eliza Carthy’s album ‘The Gift’ and the soundtrack for the films ‘Morris- A Life With Bells On’ and ‘Far From The Madding Crowd’. He was nominated for the Musician of The Year award in the 2010 BBC Folk Awards and during 2011 took the part of Songman in the West End play War Horse.

Archie Churchill-Moss: Widely regarded as one of the best players of English traditional folk, Archie has worked as a session musician for some of the UK’s top folk acts (Cara Dillon, Eliza Carthy, Blair Dunlop), as well as performing with the trio, ‘Moore, Moss, Rutter’ – the outfit which saw him receive the coveted BBC Radio 2 Young Folk Award in 2011.

With a contemporary approach to composition and arrangement Archie has developed a style of playing that draws as much influence from the tradition as it does modern popular music. He is currently seen to perform with: ‘Tom Moore & Archie Moss’, ‘Sam Kelly & the Lost Boys’ and ‘False Lights’. His most recent Album ‘Spectres’ by duo Tom Moore & Archie Moss launched in Oct 2020 through Slow Worm Records.

Hartwin Dhoore: Born in the Flemish part of Belgium, Hartwin grew up in a family where making music was encouraged and folk music was never far away. Having initially studied chromatic accordion, he later swapped his chromatic for a diatonic accordion, learning to to play by ear, from CDs and in sessions. Five years later he was touring internationally as a professional folk musician with his two brothers as the award-winning ‘Trio Dhoore’.

Inspired by traditional European music, Hartwin has crafted his own style. Performing across Europe, Canada, and the USA with different bands and projects, his original compositions have found their way to a wide audience. In 2011 he met Leana Vapper, a folk singer and bagpipe player born on Saaremaa in Estonia. Now married, they have formed an acclaimed musical partnership and have made Saaremaa their home. This has provided inspiration for their 2019 album “Kodu” (‘home’ in Estonian) and together they have performed across the major Estonian folk festivals – Viljandi Folk, Viru Folk, Hiiu Folk, Seto Folk, Merepäevad, Tallinn Music Week and so on.

Hartwin has published a sheet music book called ‘Out of the Box’ featuring one hundred of his original tunes, many of which have been written on Saaremaa and are inspired by the environment of the island.

His first solo album, ‘Waterman’ includes ten sets of fine melodies played in a delicate but touching way. The honest and calming tunes on this album reflect the symbiosis of Hartwin and his melodeon; a result of playing and creating music for many years. A “less is more” album well worth discovering.

“Waterman is balm for the soul, aquatherapy in these troubled times, with the ever-present risk of drowning in Hartwin’s music.” FOLKWORLD (UK)

“Hartwin shows how subtle, on the edge of the fragile an accordion can sing.” FOLK MAGAZINE (BE)

Theo Gibb (The Box Place) offers a first class repair, tuning and sale service for melodeons (and concertinas), from tuning and small repairs, to complete rebuilds of older instruments. The ‘go-to’ specialist for may of our best known musicians, Theo says “As a customer, you can expect me to take time to listen to you and to discover precisely how you want your instrument set up. I will work closely with you to understand the sound you want, and how you want your instrument to respond as you play. My quality control is based on the width of your smile when I put your instrument back in your hands.” He can found chatting about all things squeezebox on discussion forums at melodeon.net and concertina.net.