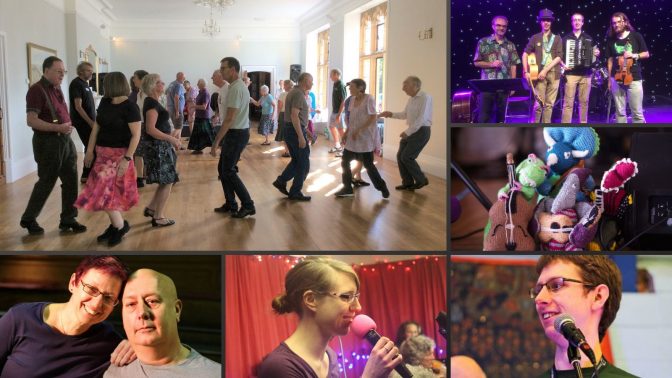 Bookings for the 2020 event - cancelled due to coronavirus - are transferable to this event.

A brand new weekend of dance at Halsway! Popular, energetic and great fun, we’re delighted to be introducing this Contra Weekend, hosted by Gareth Kiddier (of the English Contra Dance Band no less), and led by a team of some of the most outstanding new talent on the UK scene.

Charlie Turner and Jake Wood are two of the most exciting contra callers in the new wave. Contrasaurus are a four piece band featuring some of the brightest players on the dance scene at the moment. Together they’ll give you a high-energy experience of contra dance to vibrant, inventive music.

Expect a weekend packed with workshops and dancing: an immersive, joyful contra experience!

Dancers of all levels of experience are welcome; there will be plenty to challenge and entertain experienced contra dancers, while newcomers to contra will also be supported and included in the party! Dancers will be welcome to dance any role they choose.

Charlie Turner has been dancing and teaching for as long as she can remember, but a move to San Francisco transformed her contra dancing and started her calling. Now based in Cambridge, UK, she brings the best of the West Coast to contra crowds, with clear, friendly teaching and satisfying dance selections. She emphasises connection, fun, flow and inclusivity in dance. Her favourite dinosaur is the triceratops.

Jake Wood is a contra and ceilidh caller based in Coventry. Jake’s love of dance encompasses American contras and squares, English ceilidh and Playford, rapper, balfolk, Scandi, blues, modern jive, Argentine tango and lindy hop. But don’t worry, he’ll stick to Contra for this weekend! He has called at a variety of festivals including Priddy Folk Festival, Sidmouth Folk Week, and was chair of the 2016 organising committee for the Inter Varsity Folk Dance Festival. Jake is in high demand as a contra dance caller, and is also known for his workshops popularising folk waltzing. His favourite dinosaur is “probably a Stegosaurus or an Ankylosaurus. I mean obviously I love plesiosaurs, but they aren’t dinosaurs because of their hips.” Jake’s calling is generally more concise than this.

Gareth Kiddier (of many, many bands, including PolkaWorks, The Bismarcks, Oxford Nags, English Contra Dance Band and The Watch) sits in the corner and plays the piano, and generally does what he’s told. He has been Folk Dance Coordinator at Sidmouth Folk Festival since 2015 and in this role has been keen to support new bands and callers. His favourite dinosaur is the thesaurus.

Contrasaurus is a contra dance band of the late Holocene era, has 8 feet, and plays the fiddle, accordion, guitar and double bass. Heavily influenced by today’s leading American bands, Benjamin Rowe, Alan Brunier, Adam Griffin and David Ledsam specialise in playing traditional tunes in an innovative style that is great to dance to. Not technically dinosaurs…