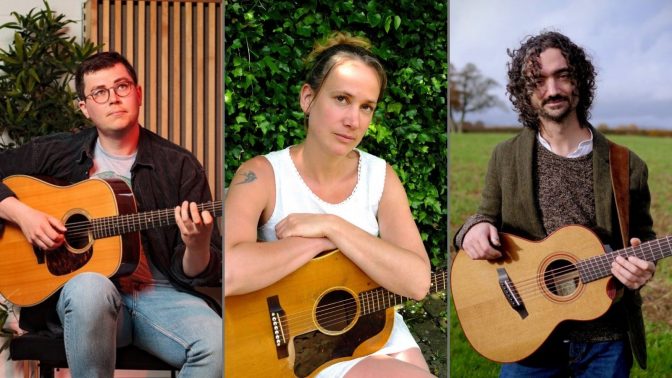 Our Guitar Study Week is an intensive and enjoyable guitar-school for steel-string acoustic guitarists, led by three fantastic tutors. Tristan Seume and Vera Van Heeringen as tutors this year, together with Dave Malkin who we are delighted to be welcoming to the Manor for the first time. You’ll have the opportunity to spend a day with each of the tutors in workshops aiming to develop your technique, skills and repertoire – and provide for an enjoyable week of guitar playing in the manor.

The week will help you to develop your skills and confidence, with options to explore finger style, flat-picking, alternative and open tunings, arranging tunes and song accompaniment, chord vocabulary, and useful theory too. Whole group, smaller group and one-to-one teaching, to leave you enthused and inspired! There will be down-time too, for you to practise, jam, socialise and spend quality time with your instrument.

The tutor team bring with them a wealth of knowledge and experience embracing a variety of styles. The programme for the week will be tailored to the experience and needs of the group. An indicating outline of what each tutor plans to offer is below:

Dave will focus on developing a solid technical foundation, where traditional music and Western-classical music diverge, thinking of the guitar as an orchestra, celebrating the idiosyncrasies of the instrument, diatonic harmony, clave, tone and interpreting English music for the 21st century, all in standard tuning and with a plectrum.

Tristan specialises in fingerstyle guitar, arranging traditional tunes and accompanying songs predominantly using CGDGCD tuning. This beautiful and versatile modal tuning remains curiously overlooked in favour of more commonly explored DADGAD, open D and open G tunings. Tristan will explore the tuning’s potential from the ground up whilst referencing and relating to other, more familiar tunings. We will work through the fundamentals, beginning with useful, go-to chord shapes and patterns and progress through developing left- and right-hand techniques, incorporating open strings, drones and harmony within the context of traditional repertoire.

Vera is a specialist on flatpicking and cross-picking techniques, playing mostly American guitar and fiddle tunes. With an emphasis on confidence and strength in both lead and backup playing, she’ll be exploring how to put the groove into tunes with rhythmic melodies. Vera will focus on creating smooth and clean solos, bass runs and fills with an emphasis on efficiency of movement, which will enrich both your solo and band playing. (For guitar in standard tuning, this course requires a plectrum).

This course is aimed at acoustic guitarists (steel-strung) of an intermediate level and above, it’s not really suitable for beginners.

As a guide, to get the most from the course you’ll need a grasp of the following topics:

Beyond this, enthusiasm is much more important than skill level; we only ask that you join in to the best of your ability. This week is all about helping you develop your playing, whatever your current level of ability, and sending you away with the inspiration and tools to continue to improve.

Dave Malkin is a guitarist, singer, producer and writer based in South East London. He studied the classical guitar at Trinity Laban Conservatoire of Music and Dance with Graham Devine. He is one half of Dipper Malkin, alongside John Dipper and his 14-string viola d’amore. The duos debut album, Tricks Of The Trade was included in The Times’ ‘Top 100 Albums of 2017’. He has performed at some of the UK’s most illustrious venues, including St John’s Smith Square, Royal Festival Hall, Union Chapel and LSO St Luke’s. He has worked as an orchestrator, arranger and copyist on numerous productions for the screen. Credits include the hit comedy-drama Fleabag, the BBC’s Black Power: A British Story of Resistance, executive produced by Steve McQueen, Amazon’s recent four-part documentary The Curse of the Chippendales, ITV’s Vanity Fair and Channel 4’s BAFTA nominated Surviving Covid. He has taught for Aldeburgh Young Musicians at Snape Maltings and been a guest speaker on the traditional music of England at Christchurch College, Oxford.

An experienced and enthusiastic educator, his CV includes countless contributions to some of the UK’s best-selling guitar magazines; Guitar Techniques, Total Guitar, Acoustic, and notably, over 130 consecutive monthly guitar tutorials spanning more than a decade of issues of Guitarist Magazine. He was also Head of Further Education at the Academy of Contemporary Music in Guildford, Surrey, and he leads workshops at guitar festivals and events around the UK. www.tristanseume.com

Vera Van Heeringen is an accomplished and highly acclaimed multi-instrumentalist and songwriter. She was part of the brilliantly comedic New Rope String Band for five years and has toured with several Cajun and Old time greats such as Dirk Powell and Sheryl Cormier. In recent years Vera has been performing with her own trio and has just released her third album ‘Won’t be Broken’ which has been described by the press as her best yet. Vera has taught guitar for over 10 years and is known for her inclusive approach which aims to inspire in a laid back and enjoyable way.