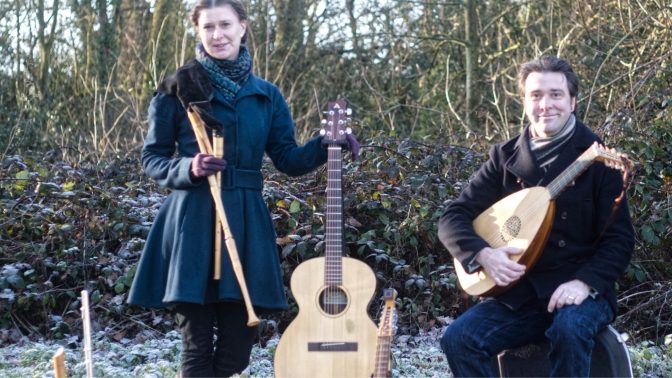 Join Chris Green and Sophie Matthews for a relaxing weekend of fun and festivities in the sumptuous surroundings of Halsway Manor. GreenMatthews are well-known for their touring Christmas shows such as A Brief History of Christmas, A Christmas Carol: In Concert and Midwinter Revels and the weekend will include a performance (show tbc) on the Saturday night.

This is an opportunity to get up close and personal with Chris and Sophie for a weekend of music and merrymaking. If you play (to any level) please do bring an instrument, if you don’t then bring a voice, and if you’re not comfortable with either please bring an appreciative pair of ears. There’ll be feasting, drinking, carolling and storytelling as well as a wintry walk across the beautiful Quantock Hills (the oldest area of Outstanding Natural Beauty in the UK).

The emphasis is very much on fun and relaxation, rather than our usual intensive workshop-type weekend. With good food and good company, the house is the perfect place to gather with friends and there’ll be some free time to explore the surrounding area or simply to relax by the log fire with a glass of something warming.

Anyone who fancies a relaxing weekend at the Manor to recover from Christmas, recharge for the New Year, or simply enjoy a welcome break with good company.

GreenMatthews are firm believers in the age-old power of narrative song to delight contemporary audiences. Taking their cue from ancient troubadour tradition, they are 21st-century wandering players – touring their self-created shows extensively throughout the UK and Europe. Although their music and tales are rooted in the past, the performance is entirely of the 21st century, immediate and accessible to modern audiences.

Born into a musical family in Coventry, Chris began playing guitar at the age of eight and piano from the age of nine, and plays most things with fretted strings or keys. Largely self-taught, he’s worked in a variety of musical genres including folk, theatre and early music. He’s a regular musician at Shakespeare’s Globe and was also one of the musicians on BBC’s Poldark, appearing in series 1 and 2. He also writes and composes, having adapted The Wind in the Willows (2017) for GreenMatthews as well as A Christmas Carol: In Concert (2018). He has also recently released his first solo album Switched-On Playford, which fuses 17th-century dance music with electronica, using a blend of early instruments, synths and loops. He’s currently working on a new live score for the 1922 silent film Nosferatu.

Sophie began playing flute at the age of ten but is now more well-known for her prowess on the English border bagpipes and has become one of the foremost players of the instrument in the UK. She also plays a variety of early woodwind instruments such as shawm, rauschpfeife and recorder. She’s also one of a handful of British players of the baroque musette, an 18th century French bagpipe similar to the Northumbrian smallpipes. Sophie is also recognised as a superb interpreter of narrative song with a clear, pure and unaffected soprano voice. When not touring with GreenMatthews, Sophie is an accredited lecturer for The Arts Society, lecturing primarily on Music in Art. Sophie also makes instruments (she made her own baroque oboe) and works with respected luthier Tony Millyard on his flutes. She’s previously worked with The Oxford Waits as well as the respected early music collective Piva. Sophie is self-taught on all of her instruments.