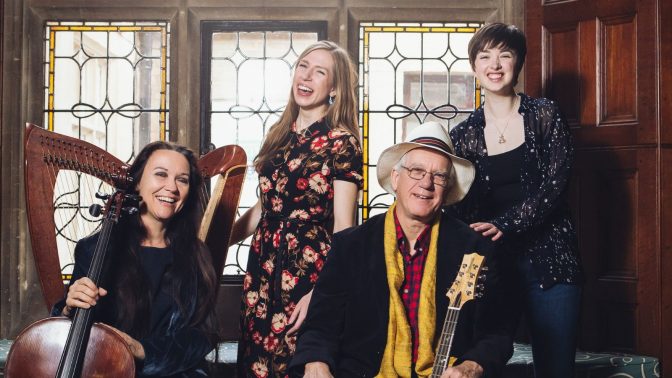 Members of Moonrakers bring their exciting and dynamic music to Halsway Manor to create a one-off folk orchestra with participants of Folk Orchestra week.

In this concert you are invited to join participants on the Moonrakers course in a night of music. There will be a couple of tunes from the week’s folk orchestra followed by a 45 min performance by two of the members of Moonrakers – Jon Bennett (fretted instruments – Guitar, bouzouki, ukelele and vocals) and Jacqui Johnson (cello).

Moonrakers is an Oxford-based group of four musicians who pride themselves in having brought traditional and contemporary folk music to new audiences in village halls, churches, arts centres and festivals across the UK.  The fact that the band “just OOZES quality” (Living Tradition) is down to the careful arrangements and selection of tunes and songs, presenting “exquisite music” (BBC). The material is a combination of traditional Irish, Scottish, Welsh and English music and their own contemporary songs and tunes, still very much ‘in the idiom’.