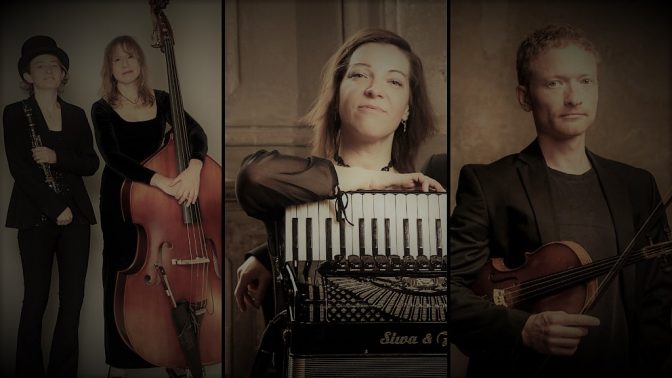 Join us for a night of Klezmer! The celebratory and soulful music of 19th Century Eastern Jewish Music.

With four fabulous musicians who are at Halsway Manor teaching musicians the modes, melodies, rhythms, and ornamentation that give Klezmer its unique flavour.

Susi, Szilvia, Indra and Johannes are all exceptional musicians who are passionate about the tradition of klezmer music. Susi and Szilvia perform internationally and are in demand as teachers at the major klezmer festivals such as Yiddish Summer Weimar, Klezfest London, Yiddish New York and KlezKanada.

Susi Evans (Clarinet) graduated as a classical music student from the Royal Academy of Music in London in 2004. She has been playing klezmer and Balkan music since 2001 with her UK-based bands She’Koyokh and the London Klezmer Quartet. She has been described as “one of the best klezmer clarinettists of our day” (Simon Broughton, Songlines Magazine). In 2020 she won second prize in the International Clarinettist Corona Competiton. She also dedicates her time to studying Bulgarian and Serbian clarinet styles and plays the Gaida (Bulgarian bagpipes) and the Frula (Serbian flute).

Szilvia Csaranko (Accordion & Piano) was born in Hungary to a family of professional classical musicians. She trained in classical piano and graduated from the University of Hildersheim in Cultural Education Studies. She founded the band ‘A Gelyzele Vayn’ in 2004 and plays in numerous projects as an accordionist, pianist and arranger. She is co-founder and Musical Director of the 80-piece Klezmerorchester Erfurt – a project that brings together amateur and professional musicians of all generations and musical backgrounds.

Indra Buraczewska (double bass)
After graduating from the Victorian College of Arts (Australia) as a classical violinist, Indra discovered the wonderful world of the bass. She has played a multitude of genres, from original pop and Balkans to jazz and funk. Touring throughout Europe, Indra has played at the Edinburgh and Galway festivals, and in Australia has appeared at major festivals including Woodford, the Falls Festival, Earthcore and the National Folk Festival. She played bass for the gypsy trio ‘Vardos’ for six years and continues to specialise in world music. Indra first joined the London Klezmer Quartet for their 2012 Australian tour and features on three of their four albums. Now based in Latvia, she has played many a klezmer concert and taught at workshops in the UK and Europe as well as having previously taught at Halsway.

Johannes Paul Gräßer (violin) “ranks among the leading violinists of the klezmer movement” (Yiddish Forward). He has been intensively involved with Yiddish music and culture as a musician and project manager since 1999. Johannes is the festival director of the Jewish-Israeli Cultural Days in Turingia, as well as the founder of the Klezmerorchester Erfurt which he has been co-directing with Szilvia Csaranko since 2015.  He also teaches klezmer workships all over Germany and Switzerland with his organisation KlezWeCan.