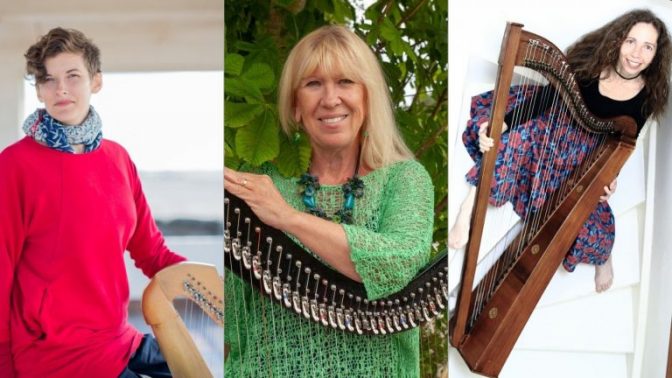 Join us for a delightful evening of folk and traditional music performed on the harp by the tutors of the Halsway Manor Harp Weekend – Steph West, Irene Watt and Merit Zloch

Steph West  Harpist and singer Steph works as a performer, teacher and workshop leader. She embraces both English and Irish trad styles, working with artists and organisations in both fields.

Steph currently plays with the English Harp Project, celebrating English folk tunes on the harp through concerts and workshops.

The only harpist with 9.5 fingers, Steph works within the integrated/disabled arts world as a performer with the British Paraorchestra and RNS Moves, and has mentored for Open Up Music who are pioneering the National Open Youth Orchestra.

Irene Watt is a harpist and singer from North East Scotland. She is a popular teacher of Clarsach and as well as the Edinburgh International Harp Festival, she has taught in the USA, the Middle East and in Europe. She brings her expertise in Scottish music including beautiful slow airs, lilting songs & lullabies, as well as jaunty jigs and dance tunes. However Irene has an eclectic taste in music and has also jazz, swing, pop and classics in her repertoire.