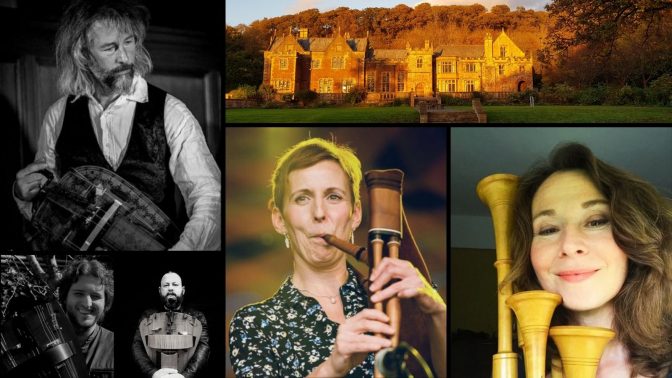 Join us for perhaps the most vibrant gig of the year at Halsway Manor. More pipes and gurdies than you can shake a stick at! Tutors of international reknown are coming to Halsway to lead the popular Pipes and Gurdies weekend. You can experience their magic at this concert performance.

Steve Tyler (UK): Steve Tyler is best known as a hurdy gurdy player, renowned for his rhythmic and inventive playing, and is equally at home with early music, traditional melodies or modern compositions. He has performed with such diverse artists as English folk singer Jackie Oates, German industrial/electronic musician F.M.Einheit and South African puppeteer John Roberts, and has played for theatrical productions (including Comus and Secret Theatre at The Globe’s Sam Wanamaker Playhouse), historical and traditional dances, mixed media performances and worked with storytellers Clive Fairweather and Dave Oliver.

For many years a performer of medieval music, his main interest is in patterns, rhythms, the interweaving of different parts and sonic structures, and to this end works on dark multitrack music mixing hurdy gurdies with dulcimer, reed organ, cittern and diverse instruments, inspired by patterns in nature, mathematics and the imagination.

He performs as a duo with Katy Marchant (bagpipes, recorder, shawm, voice) or with their band Woodwose, and is a member of trans-cultural collaboration Meridianum Ensemble.

Jasper Van den Bergh (NL): Jasper graduated as a historical musicologist in 2017. Throughout his study he cultivated an interest in Arab language, culture, and music, musically expressed in a percussion project (darabuka) with Sattar al-Saadi (Conservatoire of Amsterdam). At the moment he completes a research master Musicology at Utrecht University. Although Jasper  originally started with classical guitar – he still is part of the NJGO guitar ensemble – the hurdy-gurdy became his main instrument. He had lessons with Valentin Clastrier, Matthias Loibner, Isabelle Pignol, Thierry Nouat, Patrick Bouffard and Tobie Miller. He now regularly teaches contemporary hurdy-gurdy techniques in the Netherlands.

Scott Marshall (UK) has been playing hurdy-gurdy since 2005. He has been a regular festival and workshop tutor for the last decade. In 2017 he recorded his first solo album Gurdymania, followed in 2018 by Gurdymania 2, using multiple hurdy-gurdies and effects units. He is currently recording the third and final Gurdymania album before moving onto new folk and metal projects.

Andrea Hotzko has been teaching bagpipes for 20 years and is highly experienced in all levels of playing. She has founded her own piping school in Berlin and is also the founder and director of the German workshop festival “Spielkurs”.  In 2016 Andrea received the RUTH Award (German folk music award) for her work in the German folk scene, her commitment to promoting young talent and networking with international artists. In 2019 she was the first German bagpipe player who was invited to be a member of the jury of the renowned “Maîtres Sonneures” competition at the Le Son Continu Festival. Andrea has been playing at the Societé Fraternelle des Cornemuses du Center for many years, currently in duo with melodeon player Benoît Vignaud, in the Berlin trio Juli And Jan, and she has been a studio and guest musician with various bands, including: Blowzabella, Naragonia, Carlos Nunez, German indie-rock band Madsen …

Anne Marie Summers is a player of the English bagpipes and general multi instrumentalist best known for her work with long time musical collaborator and gurdy player Steve Tyler with whom she formed the early music ensemble Misericordia and the French/Bretton inspired group The Wendigo which also featured melodeon player Julian Sutton. In the late 90s The Wendigo produced two albums ‘This Fiery Height’ and ‘Dancing on the Sea’, original dance tunes written by the group, many of which have found there way into the ‘traditional’ repertoire of sessions and dances around Europe. Anne Marie has played in many other early music and folk ensembles over the years most notably Jon Swayne’s English bagpipe ensemble Zephyrus which raised the bar for English piping with their performances and recordings of Jon’s masterful compositions The Half Hannikin Variations and English Folksong Suite.