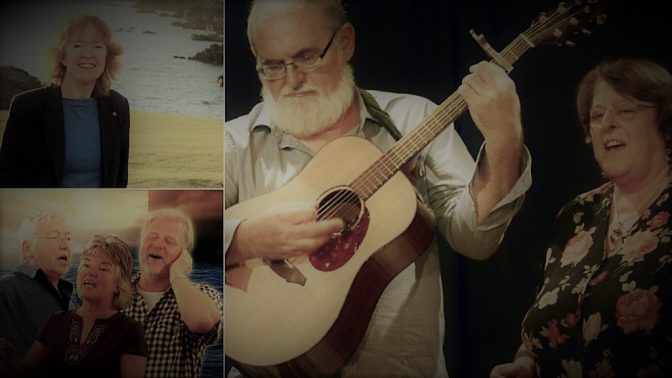 Optional addition: Stay on for Sunday supper, session in the bar and B&B on the Sunday Night £45 please call or email to book.

An informal performance by the leaders of the Give Voice weekend. This year Bob & Gill Berry host this all singing weekend, with guest leaders Marianne McAleer and JIB (Jim Mageean with Ingrid and Barry Temple).

There’s also the option to stay on for a Sunday evening Survivors’ Session, supper and B&B if you so wish!

Bob & Gill Berry are a duo that sing and play traditional and contemporary folk music and songs from the English tradition. They are particularly interested in their adopted county of Wiltshire and the surrounding counties for their music sources.

JIB is a trio recently formed by Jim Mageean with Ingrid and Barry Temple.  Jim Mageean has made his name over many years as an authority on sea songs and songs from the North-East. Also from Newcastle upon Tyne, Barrie and Ingrid sing mostly unaccompanied, though Barrie adds concertina or guitar accompaniment to some of their songs, which are mainly traditional with both serious and humorous content. Barrie’s own songs, which are written in the traditional style, have added further to their reputation in the folk world. With a charming stage manner and their well-matched voices, this relatively new trio is a combination not to be missed.

Marianne McAleer. Marianne was born into the vibrant London-Irish community of Kilburn, where she learned her earliest songs from her Cavan father, Jim McPhillips. Although she sings in a number of styles, Marianne is best known for traditional Irish songs – learned during her frequent trips back to Ireland, where she is a familiar singer at festivals around the country. Marianne is a multi-award winner at both the All Britain and All Ireland Fleadh Cheoil. She is the current champion on this side of the water, in both Lilting and Singing in Irish, and is likely to lilt if the need for a dance arises before the fiddler has reached the crossroads!