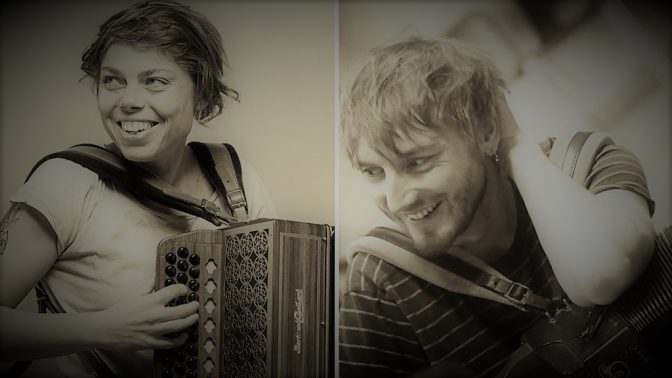 A unique evening with two of the finest European players of the the diatonic button accordion (melodeon).

Benjamin Macke (Belgium, France) is a dynamic and talented musician, who currently performs as one third of bal-folk trio Shillelagh with Gabriel Lenoir (fiddle) and Aurélien Tanghe (guitar), and as one half of Duo Macke-Bornauw with Birgit Bornauw (Flemish bagpipe and baroque bagpipes). With a background in classical music and jazz, his music embraced traditional music and ‘bal-folk’ of Flanders and further afield, together with explorations of Baroque period classical music. He also works creating ‘cine concerts’ combining live music performance and 16mm film, from American comedies, cartoons from Eastern Europe, westerns, children’s stories… both as a solo performer and on an orchestral scale!

Teaching is an important part of his work. He taught accordion and ensemble playing at Cric-Crac Compagnie, the Muziekacademie of Gooik and Ghent. He also gives a lot of workshops all over Europe in accordion, ensemble playing, improvisation on silent films…

Benjamin Macke is also known for his work around the footbass, a funny accordion that is played with the feet and produces very low sounds. He works on the revival of this obsolete instrument in close collaboration with his factor Jean-Marie Paque.