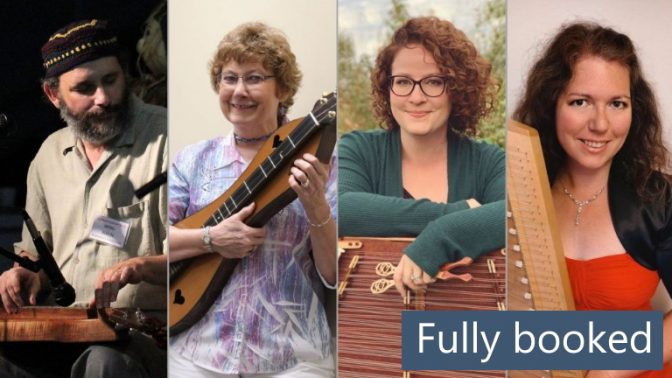 This course is now fully booked - you are welcome to join the waiting list.

Please complete this short questionnaire when you have made your booking: Dulcimer 2022 Info Form

This course is now fully booked! You are welcome to join the waiting list.

All skill levels will be catered for.  There will be two broad strands of workshops for both Mountain and Hammered Dulcimer: one for Beginner/Improvers and one for Intermediate/Advanced players. Click here for playing level guidelines. There are instruments available – both mountain and hammered dulcimers – for beginners to borrow – please request early when you book).

Please complete this short questionnaire when you have made your booking: Dulcimer 2022 Info Form

He has recorded albums and CDs, and performed, recorded and toured with the Celtic ensemble Colcannon for 10 years, and has accompanied many different musicians on their recordings, playing both hammered and mountain dulcimers.

Doug is now known especially as a maker of beautiful, high-quality, hand-tooled mountain dulcimers, which are much sought after. Musically, he is inspired by the traditional music of the world, the rock and roll and blues that he grew up with, and anything else that comes along.

Susan Trump has been winning fans for years with her singing, her outstanding instrumental skill on the mountain dulcimer, guitar and banjo, and her clear, relaxed teaching style.

Susan is a much sought-after instructor and performer who has taught in many of the major dulcimer festivals throughout the USA, and more recently at the Quarantunes online festivals. She has won awards in both banjo and mountain dulcimer competitions. She has released four best-selling solo CDs including a live recording “Live at Caffe Lena”, which captures the excitement of her “sold-out” coffeehouse performances. Susan has written four books for mountain dulcimer and  produced the three-CD series “Master of the Mountain Dulcimer” series, which featured many of the best players of the last decades.

Susan’s magic stems from her ability to link the pastoral, tranquil images of traditional rural America to our contemporary life.  Her songs touch the heart, recall the past, and inspire the times ahead.   Her sense of humour always adds a fresh touch to her performances.

Katie Moritz is a musician and teacher hailing from the Chicagoland area in Northern Illinois. She’s been playing music ever since she could remember, starting piano as a very small child and playing the tuba through school.  Her taste in music is geared towards more eclectic sounds and it wasn’t till she started playing the hammered dulcimer that she found her authentic musical “voice”. Katie loves traditional music from around the world, 1940’s jazz standards, Broadway musicals, bluegrass, and pop. She has spent over a decade studying traditional music and is dedicated to teaching and continuing a traditional style of playing. She was the 2013 National Hammered Dulcimer Champion in the USA.

Katie holds a Master’s degree in Design & Media and an Associate’s degree in Music Performance.  She has taught and performed at many festivals and gatherings around the United States. Along with the hammered dulcimer, Katie is a multi-instrumentalist who plays mountain dulcimer, ‘ukulele, steel pan, guitar, and more.

Carmen studied hackbrett, salterio, folk music, zither and elementary music education at the University of Music and Theatre, Munich. She graduated with distinction in 2010, and has taught, and performed in different ensembles since that time. She enjoys playing either as a soloist of as part of the hackbrett/harp duo Globetrotter. She is also an accomplished hammered dulcimer player and teacher.

In 2018, Carmen spent time setting up a music participation and concert program for young children – “Bambini Concert”. She has taught and performed not only in Germany, but in Switzerland, Austria, Czech Republic, Ireland, Great Britain, Canada and the USA, spending a year in 2011/12 taking part in concerts, festivals, and teaching in the USA & Canada.

Recently, Carmen has taught an online workshop series for Hammered Dulcimer on Baroque Salterio music, as well as teaching at the Nutmeg Dulcimer Festival in 2021.