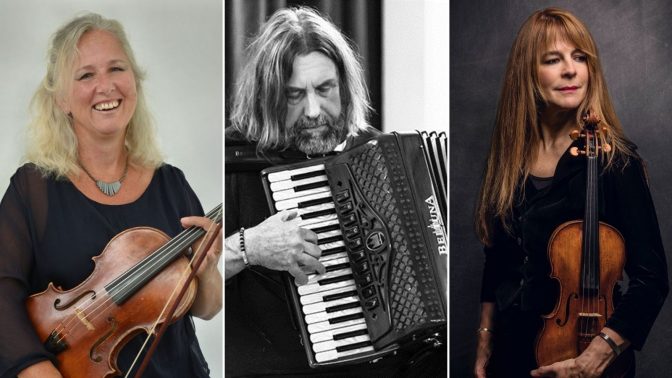 Sophie Renshaw and Lucy Russell, members of Trio Mythos, and Paul Hutchinson from Belshazzar’s Feast, join forces to lead a weekend designed for musicians from both classical and folk/trad backgrounds who wish to explore playing and arranging together. We will go on a journey of re-invention, using a range of music as the starting point for fresh new ideas. 17th Century dance music, to include Nicola Matteis and Henry Purcell, English and Scandinavian folk tunes, John Adams and others will inspire us to create our own original compositions or re-work old ones in small groups. An ability to read music will be helpful but is not essential.

Paul an experienced leader of courses at Halsway Manor and Benslow Music says:

“I will demonstrate various methods to breathe new life into even the dullest tune. It is my belief that the notes of a melody should be no more than ‘serving suggestions’. Focusing on rhythm, harmony and time signatures, expect some surprising results.”

“I love to take tunes from the folk/classical repertoire and invent ways to change them. I hope to share some of the discoveries I have made, and find new ones, together. I come to music primarily through harmony and rhythm and hope to bring more confidence to string players who find it difficult to orientate themselves, harmonically.”

“I find inspiration from the happy marriage between baroque and folk music. So much dance music is interrelated. Gutsy, playful, dynamic, free-spirited – you could be describing either genre! I love nothing more than to bring life to a simple tune, allowing it to evolve through experimenting with any ideas that arise; adding ornaments, new rhythms, extra notes…whatever you fancy. “

Paul, Sophie and Lucy met as a result of lockdown and when they sat down to play, it was as if there were no ‘boundaries’ and the ‘path’ was in fact the same one! Their collective enthusiasm and passion for music, matched by a curiosity to learn from each other, results in a delightfully fizzy freshness of approach which they are keen to share!

We’re aiming this course at musicians of a lower-Intermediate level and above (Grade 3 and upwards if you do ABRSM exams). The ability to read music will be an asset. With this team, players of strings and accordions will be exceptionally well-catered for, but players of other instruments (woodwind, brass etc) are very welcome too. Get in touch if you’re unsure.

Lucy Russell is an internationally regarded violinist who is versatile, passionate and expert at what she does. A graduate from York University, she fell in love with both the baroque violin and with quartet playing whilst still a student, and her life has been defined by her work on both instruments: performing, recording, and teaching a diverse array of repertoire as leader of the Fitzwilliam Quartet, and within the world of early music, her partnerships with John Butt on harpsichord and with Sezi Seskir, fortepiano. She has played, recorded and toured with many of the mainstream early music ensembles, and has also been the leader of some of them.

Lucy believes in developing a breadth of musicianship including improvisation, folk music, dabbling with composition, creating new sound-worlds on her Hardanger violin and in communicating beyond the written page. She plays in Trio Mythos with Sophie Renshaw, which regularly teams up with the Brothers Gillespie, and her forays into folk have now presented an opportunity to work with the inspirational Paul Hutchinson.

Working with both amateurs and students is a central part of her life, teaching, directing and enabling.

She is training to become a Mindfulness Teacher, which she hopes to bring into the lives of fellow musicians at all levels – bringing greater freedom, presence, and joy through music as a result of cultivating a more astute sense of awareness and acceptance of self.

Sophie Renshaw: I am a Co-Founder of InsideOut Musician, a community of musicians and creatives started during lockdown, and enjoy a busy performing life as a leading violist, chamber musician and teacher. I have played in top level ensembles including Orford String Quartet and Scottish Chamber Orchestra.

Throughout my performing career I have sought to develop my own musical ideas through improvisation and composing and in 2016 I became curious about the musical connections between folk and baroque music. I joined with violinist Lucy Russell and cellist Ruth Phillips to form a gut string trio – Trio Mythos- to explore collaborations with folk artists, presenting programs of original music in new arrangements alongside well-known baroque and folk works.

Our first project presented Bach’s Goldberg Variations arranged for string trio (Sitkovetsky) alongside songs by Sam and James Gillespie. In 2019 the trio joined forces with Northumbrian singer-songwriter duo Brothers Gillespie and Provencal vocal polyphonic trio Tant Que Li Siam to record an album of original music along with my re-workings of English folk standards. In future the 8 musicians aspire to engage with stories that explore the relationship between journeying , migration and deep cultural rootedness to create new music.

I am a huge fan of Paul Hutchinson’s playing, after hearing him perform in Balshazzers Feast, and in 2020 I asked Paul to join the InsideOut Musician team. Every time I join Paul on a tune I learn something new and I hope to share this excitement with anyone who signs up for this course.

Paul Hutchinson: A member of the much-loved duo Belshazzar’s Feast, Paul is celebrating 25 years of touring the world including appearances on television and radio gaining them many plaudits including a nomination at the BBC Folk Awards.

Paul also has a keen interest in 17th and 18th century dance music which has resulted in appearances at festivals in UK, Europe and America. In 2019 Faber Music published his book – 60 Country Dance Tunes 1786 – 1800.

His love of fusion music originates from his days in the renowned Celtic jazzers, Hoover the Dog. Pagoda Project was the next exciting chapter in his musical journey providing a vehicle for his own compositions with more than a helping hand from the wonderful jazz clarinettist and improviser, Karen Wimhurst. Recently they have been joined by the multi-instrumentalist and singer, Anna Tam who are now known as Coracle.

During the various lockdowns of 2020 Paul completed Petrichor, an album of his compositions with musicians from around the world.

Collaborations are always exciting, but working with classical musicians of this calibre is a dream come true.