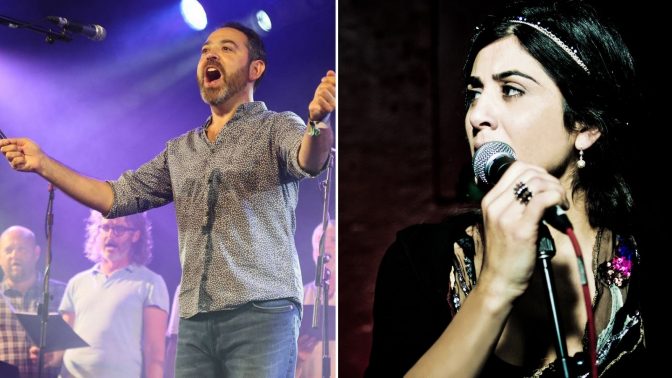 Paul is well known in the UK as a singer, musician, composer and arranger; he will focus on songs of the British Isles, arranged for mixed voices. These will be taught by ear, so musical literacy is not a requirement. Listening skills, ensemble work, and performance matters will be addressed in Paul’s inimitable manner.

Drawing on her Middle-eastern background, Çiğdem will introduce songs with unfamiliar styles and rhythms (7/8, 9/8 or 10/8). She’ll teach lyrics in Turkish, Kurdish maybe even Greek, and talk about basic scales / maqam and maybe work on vocal improvisation and ornamentation.

Hosted by Meg Rose, expect a fascinating and enjoyable choral journey, with an informal sharing from tutors and participants on the Saturday evening.

Singers of all levels of experience are welcome. You do not need to be able to read music.

Çiğdem Aslan is an Istanbul-born singer who sings in many languages and regional styles, including Turkish, Kurdish, Greek, Bosnian, Bulgarian, Romany and Ladino. She studied English Literature at Istanbul University, before studying music at Goldsmiths College, London.

Her musical journey started within the family – in which music is one of the pivotal elements of the culture – gradually meeting with the other sounds of Istanbul and beyond. In 2003 she moved to London and joined Dunav Balkan Group, and in 2008 she joined She’Koyokh; “Britain’s best klezmer and Balkan music band” Songlines. She also performs folk songs from different regions of Anatolia accompanied by Tahir Palali on kopuz/baglama and herself on frame drums.