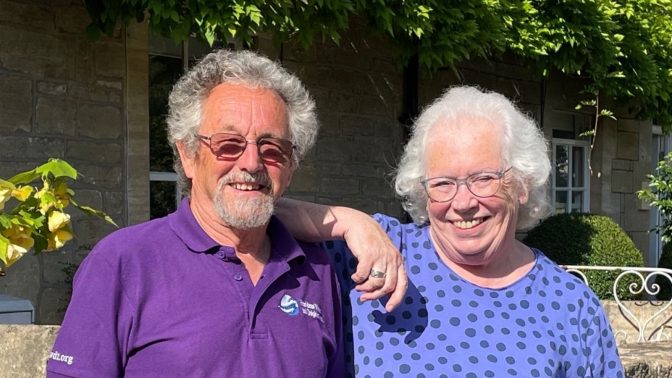 This is a partnership event so to register an interest you will need to contact the team directly. Please email [email protected] or  call 07875 174401 (Penny Rigby).

Join them, and friends old and new, for a weekend of singing, presentations and fun events. Bill & Rosie will be joined by guests Judy and Denis Cook from the USA.

Bring your voices, instruments and walking boots for an optional circuit of the ‘Halsway Loop’ to blow away the cobwebs! A weekend of sharing memories, songs, and having a wonderful time revisiting those good old days!

The weekend is aimed at experienced traditional Singers who do not need to read the words, and their partners.

This is a partnership event so to register an interest you will need to contact the team directly. Please email quantocktradsing@gmail.com / call 07875 174401 (Penny). It is anticipated that application forms will be sent out in late summer/early autumn.

Bill Crawford was in a folk club the night Kennedy was assassinated – and on a great many more nights too! An Exeter Folk Club stalwart from the early days, Bill has run clubs and sessions in the Home Counties and across the South West, and he’s a regular MC and performer at Chippenham Folk Festival, Sidmouth Folk Week and Dartmoor festival. A fine solo singer with a broad repertoire, Bill was also a member of accapella group The Claque until they disbanded in 2017.

Rosie Upton, who has been based in the west country for more than 45 years began singing in Derbyshire whilst still at school and has developed an individual style based on English, Scots and Irish traditional songs and ballads with an entertaining presentation. Her rich voice is particularly well suited to the occasional blues.

Penny Rigby, from Bristol, began visiting folk clubs in London during the 1970s but it wasn’t until around 1990 that she became actively involved in folk festivals.  She has broad interests in the folk tradition, particularly enjoying singing sessions and contra dancing. She has considerable administrative experience, and was treasurer of the Pennymoor Singaround.

Pete MacGregor, originally from Scotland but based in Bath for most of his life, is a singer, songwriter and guitarist whose distinctive voice is accompanied by sensitive guitar arrangements. His own lyrical compositions are written in a traditional style and combine strong melodies with memorable choruses, matched by original reworking of traditional songs and ballads.

Judy Cook  grew up in a family that sang for fun. She continues to enjoy singing with friends and family as well as professionally; always delighted to share the music she loves. She began actively touring in 1998 and is appreciated on both sides of the Atlantic for her singing and obvious love and understanding of the old songs – and some good new ones. Her first of nine CDs was released in 1998; the latest in 2018. Her first book was published by University of Wisconsin Press in 2013.