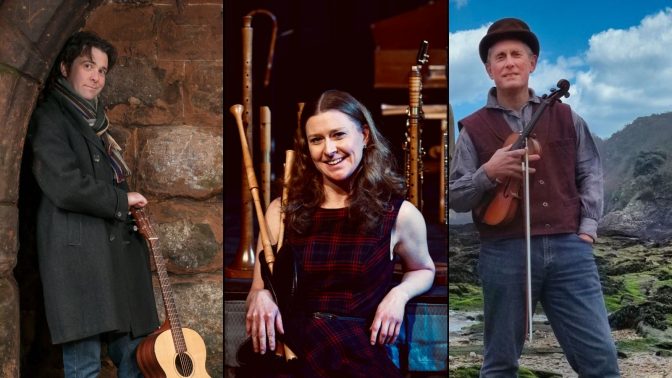 Join us for an exploration of 18th century English dance tunes! The last edition of Playford’s Dancing Master was published in 1728 but other publishers continued in his footsteps, making the 1700s a golden age for English vernacular music. It was a time when the lines between folk and classical music were blurred with the likes of Purcell and Handel equally at home composing jigs and hornpipes as they were with operas and oratorios. We’ll be learning some superb tunes from this period, looking at them in their historical context but also exploring ways to make them swing in the 21st century.

This course is best suited to intermediate and advanced level players. The ability to read music an advantage but not essential. Any instrument welcome.

Richard Heacock (fiddle) began playing for folk dance with The Vale Islanders Playford group and Icknield Way Morris. He later joined English traditional group Boldwood, and produced their first CD “Feet Don’t Fail Me Now.” He has toured Europe with The Sea Band, and is an enthusiast of French and Breton dance music and plays in Breton trio The Andro Sisters and with Paul Hutchinson. Richard arranged and recorded the traditional dance tunes for the BBC series “Poldark” and appeared as an on-screen musician together with Chris Green and Matt Coatsworth (The Warleggan Band). Richard is a frequent visitor to Halsway, and has taught and played on the Playing Playford, French Dance and Poldark Dance courses.

Chris Green began playing guitar at the age of eight and piano from the age of nine, and plays most things with fretted strings or keys. Largely self-taught, he’s worked in a variety of musical genres including folk, theatre and early music. He’s a regular musician at Shakespeare’s Globe and was also one of the musicians on BBC’s Poldark, appearing in series 1 and 2. He also writes and composes, having adapted The Wind in the Willows (2017) for GreenMatthews as well as A Christmas Carol: In Concert (2018). He has also recently released his first solo album Switched-On Playford, which fuses 17th-century dance music with electronica, using a blend of early instruments, synths and loops. He’s currently working on a new live score for the 1922 silent film Nosferatu.

Sophie Matthews began playing flute at the age of ten but is now more well-known for her prowess on the English border bagpipes and has become one of the foremost players of the instrument in the UK. She also plays a variety of early woodwind instruments such as shawm, rauschpfeife and recorder. She’s also one of a handful of British players of the baroque musette, an 18th century French bagpipe similar to the Northumbrian smallpipes. Sophie is also recognised as a superb interpreter of narrative song with a clear, pure and unaffected soprano voice. When not touring with GreenMatthews, Sophie is an accredited lecturer for The Arts Society, lecturing primarily on Music in Art. Sophie also makes instruments (she made her own baroque oboe) and works with respected luthier Tony Millyard on his flutes. She’s previously worked with The Oxford Waits as well as the respected early music collective Piva. Sophie is self-taught on all of her instruments.