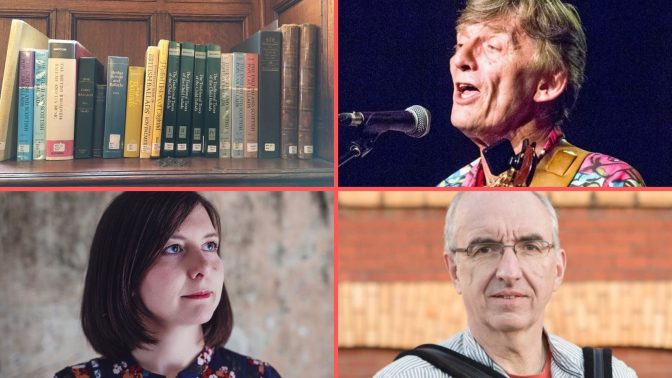 Pete Coe, a performer on the folk scene whose pedigree has few equals, will be joined by leading performer of traditional songs and Child ballads Brian Peters, and BBC Folk Singer of the Year nominee Emily Portman, to lead Halsway’s second course focussing on ballads.

The week offers a wide range of practical skills workshops, interspersed with informative presentations. We’ll explore the special challenges and rewards of the Child ballads, and also the wider range of traditional songs with stories to tell. We’ll look at the broadside trade, now acknowledged as the source of much of our English folksong repertoire, and listen to some wonderful recordings of the great traditional singers to see what we can learn from them.

Our tutors will be bringing songs for you to expand your repertoire, advising on sourcing new material, and offering tips on techniques to make your interpretations come alive. We will focus on the special joys of unaccompanied singing, but also work with instrumentalists on accompaniments that serve the song. There will be plenty of opportunities to sing, both in the classes and in Halsway’s popular evening bar sessions, to which we hope you’ll be bringing ballads of your own.

The weekend is aimed at singers and singer / instrumentalists who love the glorious melodies, the engaging stories, and the history of the traditional song repertoire – especially the classic collection of F.J. Child – and who wish to work on their approach to putting ballads across.

Singers of all levels of experience, unaccompanied or otherwise, are welcome. Competent musicians are encouraged to bring instruments for accompaniment – our tutors cover melodeon, concertina, guitar, banjo, bouzouki, dulcimer, etc, but will not be teaching instrumental technique.

Pete Coe is a singer, multi-instrumentalist and song collector, and has been a professional touring and recording folk musician since 1971.  He’s played in iconic bands including The New Victory Band and Bandoggs, but he’s best known for the variety of his solo performances.  Pete has also researched and given illustrated presentations on broadside ballads.

“an impressive singer, songwriter and instrumentalist who switches from bouzouki to melodeon, banjo or dulcimer, and can handle anything from traditional ballads to comic material.” The Guardian

Brian Peters is an experienced singer of traditional songs with a wide repertoire but a particularly strong reputation as an interpreter of the ‘Child Ballads’.  He’s a multi-instrumental accompanist proficient on guitar, anglo-concertina and melodeon, has given classes on ballad repertoire and interpretation in the UK, USA and Canada, and devised the ‘Songs of Trial and Triumph’ presentation and CD, devoted to the Child Ballads.

“He sings and plays with consummate skill, breathing life into unusual ballads which shimmer with magic and murder, tragedy, action, excitement, and humour.” Steven Winick of the Library of Congress, Washington DC

Emily Portman  (Furrow Collective, and Emily Portman Trio) is folk singer, writer and concertina player with nominations for folk singer of the year and holder of the 2013 BBC Radio 2 folk album of the year. As well as being a performer and lecturer at Newcastle University, Emily has presented BBC Radio Merseyside’s folk show ‘Folkscene’, written articles for the acclaimed roots and world music magazine fROOTS and has given talks on ballads at Cecil Sharp House and The International Ballad Conference. At the time of writing she is touring and recording a new album as a duo with Rob Harbron.

“her album Coracle is, without doubt, one of the folk albums of the year” Songlines.