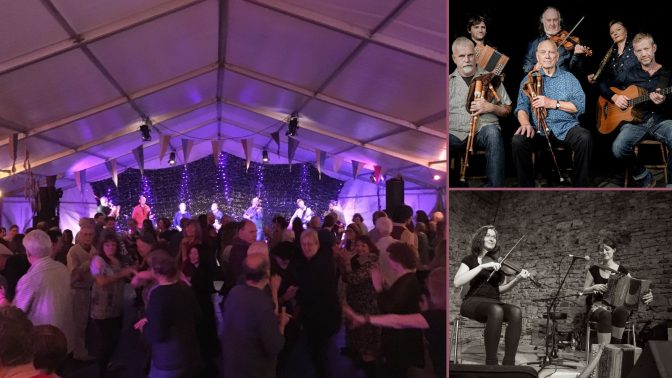 Limited places for camping will be available (tents only, campervan spaces are reserved for weekend participants).

Arrival from 6pm. No evening meal. Big Halsway breakfast included. Depart by 10.30am on Sunday.

After a lengthy postponement we are absolutely delighted to announce the return of International folk legends Blowzabella to Halsway, for a second festival weekend.

If you can’t make the full weekend, you can come and enjoy a Saturday night Bal, featuring the mighty Blowzabella and special guests Duo Rivaud Lacouchie (France).

The band prefer to play where people can dance, and we’ll have a big marquee on the Manor lawns for the occasion. Blowzabella play dance music composed and arranged by the band for a variety of English and European traditional dances. The dances are easy to pick up and you don’t have to be an expert to get involved, just have a go. Many people choose not to dance and come along to watch and listen – and that’s fine too. The variety of the arrangements and the mixture of unusual and more usual instruments provides plenty to enjoy whether you’re out there dancing or sitting on the side-lines and listening.

Accommodation in the Manor is full, and we are reserving campervan spaces for attendees of the full Blowzabella weekend – but we will have limited places for those wishing to bring tents and camp overnight and join us for breakfast in the morning.

The band make an inimitable, driving, drone-based wall of sound, played with a fabulous sense of melody, rhythmic expertise and sheer feeling. They compose their own music which is influenced by English and European traditional dance music. Many of the tunes they’ve composed are “standards” in the modern British/European folk repertoire and are played by people all over the world. Bands across Europe who experiment with folk music often cite Blowzabella as a major influence.

Duo Rivaud Lacouchie is the story of Anne and Alexandra, it comes from the land of apples and Limousin cows where they first met and started playing together. They’ve developed their Bal around the repertoire collected in Limousin, featuring  a whole diversity of timbres and dances. From bourrées to polkas, from sautières to waltzes, they invite you to share the excitement of this music through their energetic playing. In 2016, they released their first album Ordich!, AEPEM and in 2020 the second Zo!