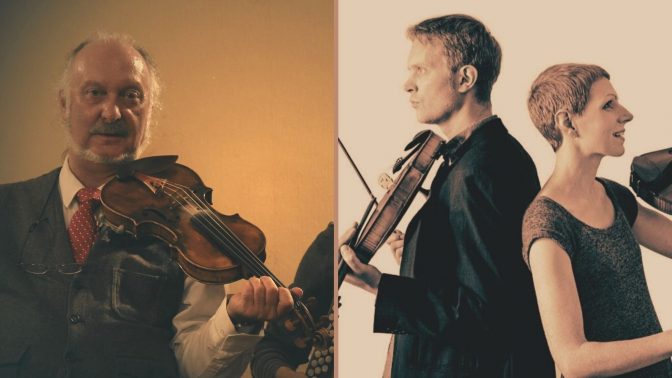 North Devon duo Nick Wyke & Becki Driscoll share a love of traditional English fiddle music and also compose their own tunes. We are delighted to be welcoming Dave Shepherd, an extraordinarily talented musician and teacher, to join them as our guest tutor for 2022.

The musical partnership of Nick Wyke & Becki Driscoll has its roots in the traditional music of South West England but explores a contemporary sound that draws on inspiration from across the globe. Their latest album Cold Light bridges the gap between past and present with a mixture of traditional dance tunes, new compositions and self-penned songs. Nick & Becki are expert workshop leaders as well as performers and have a number of projects on offer alongside their duo repertoire.

Grew up with traditional music and dance in his native Yorkshire where his father was a dancer with the Grenoside Traditional Sword Dance Team (Dave plays the fiddle that once belonged to Walter Fleetwood, Grenoside’s musician for five decades). He took up the fiddle when he was 12 after his family moved to London and played for morris and country dancing. Later Dave discovered the various European fiddle traditions which led him to see English music and dance in a different light. He is best known as the fiddler in Blowzabella and over the years has developed a distinctive style. Several of Dave’s compositions have become standards both here and in Europe. Dave is well known as a teacher of traditional dance and fiddle in the UK and abroad.

As well as playing in Blowzabella he has played in a duo with Becky Price, currently plays with Belgian accordion player Simon Gielen, and more recently has begun researching the English dance tradition and formed a duo with diatonic accordionist Anna Pack to present dance workshops and play for dancing.

Dave is currently is researching English traditional dance and music and the results of this show a very different dance and music culture to what is generally perceived to be the case in the present day folk revival. He is now presenting a series of workshops in various parts of the country in which he shares the results of his research, particularly in English fiddle music and dance.