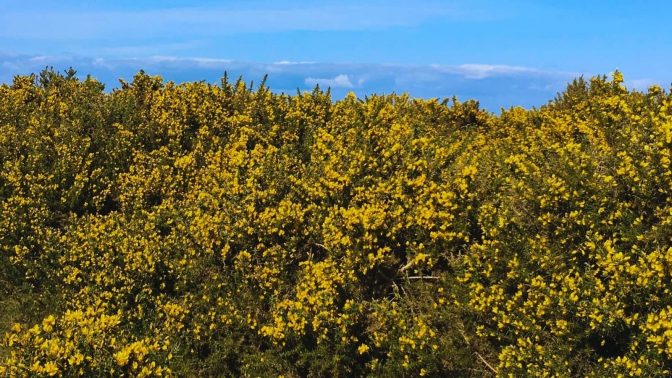 Those of us who know the Quantock Hills know how glorious they are in spring. Primroses scattered through hedges like golden freckles, before other blooms come up, the birds start nesting – the land bursts with green after a winter of the open land turning brown and the trees of the deciduous parts of the forest, including the wonderful old sessile oaks, losing their leaves. Standing high up and looking over the Severn Sea, as it used to be known, it is easy to feel that you are on the edge of a place that welcomes the spring early, where new natural life starts, where all is full of hope and renewal.

As well as that sentiment being key to all the folk traditions surrounding spring, it was also in the heart of one of this country’s greatest writers on the natural world, the poet Edward Thomas. Whilst it is well known that famous writers such as Wordsworth and Coleridge stayed locally, there are other, lesser known, but fascinating and important writers that spent time in and were inspired by the Quantock Hills.

Thomas found much of his name as a poet in the years 1914-1917, before he died at the Battle of Arras in the First World War, cutting tragically short his life and a promising career as a truly great writer. But in 1913, at the age of 35, he took a journey which was to inspire his later poetry and form the basis of a book that gained the attention of other writers, including the American poet Robert Frost, who thought it was the loveliest book on Spring in England. This book was In Pursuit of Spring.

Looking back at this journey a short time after, this pre-war bucolic adventure must have seemed like an impossible dream, but before the minds of young men were full of battle, Thomas’s was full of his own personal quest – to leave London and make the journey “on or with a bicycle” from his parents’ house in Balham, South London, to the Quantock Hills, where he hoped to meet Spring, as it began its journey across England from the South West.

Leaving Balham on March 21st, Good Friday, Thomas travelled down through Surrey, Hampshire and Wiltshire, crossing the wilds of Salisbury plain, before entering Somerset not far from Frome and continuing down through Shepton Mallet, Croscombe and Wells, then across the county towards Bridgwater, before finally reaching his destination of the Quantocks. He travelled around what we would see as the main road route today, following the coast road towards Nether Stowey, then along through Holford and Kilve, before continuing down the west side, what would be the Williton to Taunton road today, where he paused to stay in West Bagborough at The Rising Sun, a pub modern visitors would recognise.

Perhaps Thomas had premonitions that it would be so, but his writing is perfectly suited to the landscape of the Quantocks. He is not so interested in the famous tourist spots or the grand gestures of landscape, so much as the feel and detail, that atmosphere of moving through place, the joy of the rural West Country hedgerow, the first call of the chiffchaff and delicate new growth. He is a writer of true rather than conceptual place, of the landscape locals know intimately, rather than the landscape tourist guides wish you to visit.

As a local, one can perhaps recognise places he describes, or that lie in the photos of everyday views that he took to accompany his text. There is one of Crowcombe, but rather than its historic buildings such as Crowcombe Court it is of a country lane – a hedgerow/bank is the focus, running down the middle like a spine, the church anonymous in the distance, the high hills hovering. These are not the places a guidebook would send you to – they are those places that as walkers or residents we just discover, the ones that history forgets – and because of this, In Pursuit of Spring is a record of a moment in time, a moment in natural history and landscape, like no other.

The Pursuit of Spring in all its natural abundance looks forward: the magic for him around Nether Stowey is all the pre-flowering honeysuckle wreathing its way through other plants and the promise of its summer abundance, “the mere imagination of what these banks would be like”, which for him alone conjures Coleridge, interesting when these days people focus on the rather ordinary cottage in which he lived. Thomas is interested in the spirit of the place, the feelings of the landscape that inspired poetry, the mixture of the mild and the wild that for him is both quintessentially West Country and embodied in Coleridge’s work. In Thomas’s words, “the sun-warmed misty woods of the coombes, the noise of slender water threading them, the exuberant young herbage, the pure flowers such as stitchwort and the pink and ‘silver-white’ cuckoo flowers, but above all the abounding honeysuckle, produced an effect of wildness and richness, purity and softness, so vivid…” This is a landscape that is alive; it is not made to be ticked off as a location by a tourist, but moved through, absorbed, and welcomed as the inspiration for deeper feeling, a feeling we too can experience if we walk the hills and notice the detail, the magical parts, rather than the abstract whole of them.

There are also details giving us glimpses of life in 1913 – woodmen trimming cordwood at the side of the road, his stops at pubs, The Rising Sun in West Bagborough and The Hood Arms at Kilve, both still pubs today. A mill, a farm, a cottage or two – we can follow the road and guess which places he meant. It is a followable route through the area, but of two parts: the buildings that still stand and the businesses that are still open, the names on graves in the churchyards that we could still visit, and then the magic, still there for us if we want it, albeit sadly less abundant in terms of wildflowers and hedgerows, but entailing a different way of seeing the landscape to access it, a more personal experience of place.

He continues. The flat rocks merging into the sea. The views east to Brean and West to Exmoor. A detour to East Quantoxhead, vividly described with cottage gardens full of wallflowers. He conjures places we know, that are also lost, distilled in their time. Old sandstone quarries bearded with gorse, carpeted with moss. Magic of description, then everyday description, the station and workhouse at Williton, eating cream with a spoon. Birdsong. As mentioned he ended up missing most of the high hills, opting due to pouring rain for the main road to Taunton, passing through Crowcombe and Flaxpool before turning left to West Bagborough and its pub. He overhears locals, talking of their garden veg and the biscuits they are eating, not as good as Watchet ones of Half Moon biscuits which were best of all, and how they have never worked on Good Friday and a woman they knew who did became very ill… Insights, into the natural heritage and the intangible human heritage, not the famous poets but the ordinary people, both of whose stories are worth listening to, are worth telling to create a true portrait of this area.

He climbs from West Bagborough, looks out over Cothelstone Manor, 997 feet up he then descends, through the million gorse petals that “seemed to be flames sown by the sun.” He sees his first bluebells and cowslips, not growing but discarded by a child. Winter’s grave. On this last day in his pursuit of Spring.