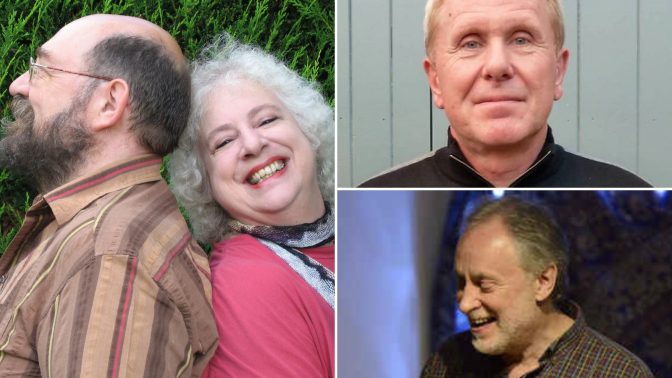 Join us for an early evening of folk song. Leaders of our Give Voice weekend will be sharing folk songs.

Lester Simpson: As one third of ‘Coope Boyes and Simpson’, one fifth (or sixth!) of ‘Coope, Boyes, Simpson, Freya and Fraser’, and one quarter of Narthen, there are few singers with a greater skill and repertoire in traditional harmony singing.

Mick Ryan is well known on the folk scene as a fine singer of traditional and original songs, and was described by “Folk Roots” as ‘definitely the most underrated singer in the country.’ Having written both comic and serious material for the very popular band Crows in the 1980’s, he has since written for radio and a series of highly successful folk musicals: ‘A Tollpuddle Man’ (with Graham Moore); ‘A Day’s Work’; ‘The Voyage’; ‘Tanks for the Memory’ and, recently, ‘The Navvy’s Wife.’ Who better to lead the songwriting element of the weekend?!