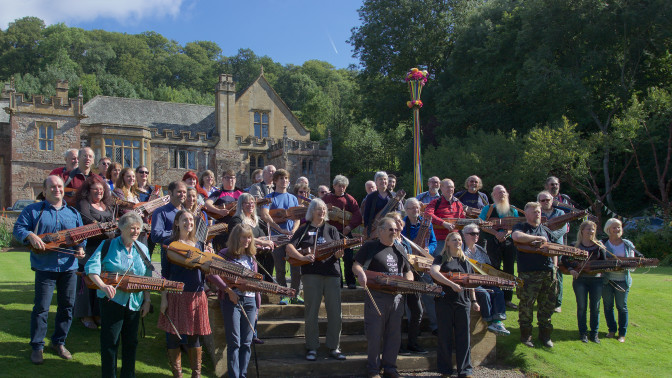 A weekend of workshops, ensemble playing, sessions, dancing, a concert and more! Three contrasting international tutors – Magnus Holmström from Sweden, Vicki Swan from the UK and Johannes Mayr from Germany – will between them offer a whole range of tuition on a variety of subjects. You can expect Swedish music, British music, European music, plus technique and ensemble classes. Master Nyckelharpa maker Olle Plahn will be back to help with repairs and maintenance, and Jonny Dyer will also be on hand to co-host the weekend with Vicki. Players of all abilities are welcome, with limited places available for complete beginners wishing to borrow an instrument. Come and explore a range of repertoire, and meet, play and socialise with other players and enthusiasts!

“I think just getting to play the nyckelharpa was nice enough! Meeting all the lovely people, course members and staff alike, was a lovely bonus!” Participant

The weekend is for players of all abilities to explore a range of repertoire, and to meet, play and socialise with other players!

There are limited spaces for complete beginners who wish to borrow an instrument – please book early. Beginners may also find the April 2016 ‘Nyckelharpa for Beginners’ course at Halsway Manor useful.

Magnus Holmström, Sigtuna (Sweden), is a professional nyckelharpa player and an experienced teacher. He studied at the Eric Sahlström Institute in Tobo and at the Royal Collage of Music in Stockholm. In 2004, he won the World championships with “Gammelharpa” (old style nyckelhapra) and in 2006 both with “Gammelharpa” and modern nyckelharpa. In 2006, he also won the award; “musician of honour” at Burträsksvängen and in 2008 the Bror Hjorth Scholarship. He is a regular tutor at the International Nyckelharpa Days in Germany.

Johannes Mayr, Breitscheidt (Germany) is a very active and versatile musician performing for the last 20 years on accordion, nyckelharpa, organ and double bass. Originally coming from a Bavarian-Swabian folk-background he feels comfortable in many different European folk-styles. Johannes performs with Cassard (Traditional music of tomorrow), La Marmotte (folk celtique) and Bordunrot (old and new folk music) in addition to a solo program with his own compositions. He also works as a choirmaster and teaches a variety of workshops. A graduate of the European Nyckelharpa training and has been a tutor on the International Day of Nyckelharpa in Germany. Johannes is also a nyckelharpa maker and performs on his own instruments.