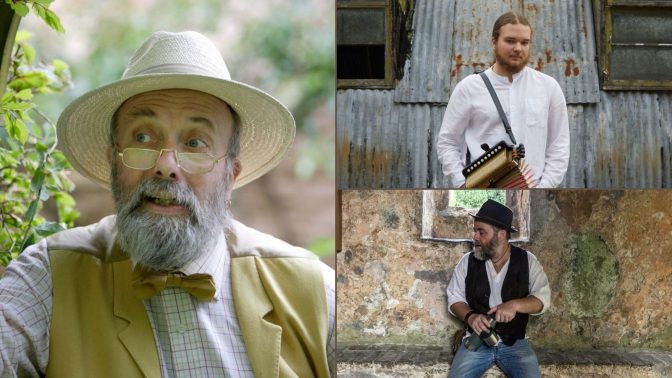 Storytellers stand on the shoulders of those who’ve gone before: teachers, tradesmen & women, travelling people, parents and grandparents.

These ghosts have given us tales to tell and urge us forward. Taffy and Chrissy Thomas and the Tales in Trust team of Norwich yarnsmith Dave Tonge & award winning singer and folk musician Mossy Christian have put together a weekend of (socially distanced if necessary!) workshops, performances and presentations to delight all who wish to tell a tale or just relax and listen.

Bring stories to share, instruments if you play one, or just come as audience. Importantly, bring your ears; for as Taffy rightly says: “If speaking was more important that listening, we’d have two tongues and one ear”. Your forbears knew that, so forward!

Presentations over the weekend include:

Mossy Christian: “Come and listen to my tale”
Broadside ballads were one of the earliest and most prolific printed forms of story dissemination. In this presentation Mossy will examine the history of broadsides, and what modern storytellers can learn from the stories and songs they contained. From the late sixteenth to the early twentieth centuries, broadsides were prevalent as affordable and readily available sources of entertainment. This crude form of street literature employed subjects as varied as ancient legends, public executions, and the loss of RMS Titanic.

Trickster Tales from Tonge
Dave Tonge explores his family heritage, from their origins in the village of Tonge in medieval Kent to their relatively short, yet eventful move to Norfolk just over 100 years ago. Dave’s mum often warned him against such research, for who knows what skeletons were hidden in family cupboards long ago and much to his joy, she was right – Dave’s ancestors were much like the rogues, knaves and arrant rascals that inhabit many of his tales and all get a chance to beguile their audience in this session.

Tellers of all levels of experience, and those who just want to listen.

“I am new to storytelling. I am now interested in taking up the art, and have already made contact with a storytelling group.” Participant

Taffy Thomas MBE, England’s first storyteller laureate Taffy is the patron of The Society for Storytelling. Taffy received The English Folk Dance and Song Society Gold Badge award in December 2010. With Taffy’s head bursting with stories, riddles and folklore, professional storyteller Giles Abbot once commented, “when Taffy goes it will be like a library burning down.”

Mossy Christian: Award winning professional musician, singer, and dancer, Mossy Christian specialises in the musical traditions of Lincolnshire and Yorkshire. Drawing on a rich and diverse repertoire of traditional dance tunes and folk songs, charting the lives of everyday people, in their work and recreation, from the 1700s to the present day. Delighting audiences across the UK, with performances at festivals and folk clubs from Whitby to Sidmouth, Morpeth to Nottingham, his shows are a treat not to be missed. As a respected researcher, Mossy has presented and published multiple papers, on subjects including: ‘The Midwinter Traditions of Lincolnshire’, ‘The Musical Pennock Family of Goathland’, and the folk-song collectors Frank & Ethel Kidson.

Dave Tonge – the Yarnsmith of Norwich – is an author, historian and professional storyteller from Norfolk. Dave has been telling tales for over 20 years, traveling the land and spinning yarns at museums, heritage sites, festivals, fayres and schools all over the UK, including Halsway! His books ‘Tudor Folk Tales’, ‘Norfolk Folk Tales for Children’ and ‘Medieval Folk Tales for Children’ are available from The History Press.