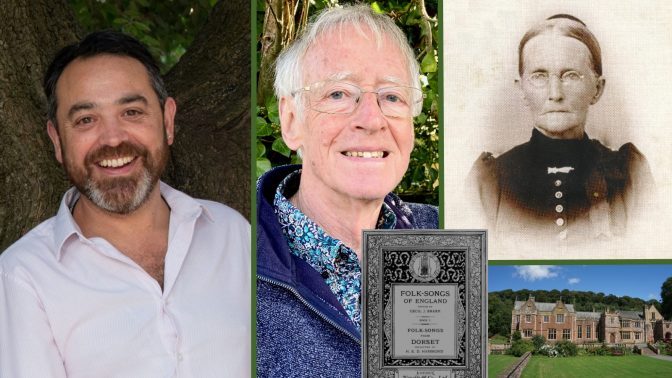 Bonny Sartin (Yetties) and Paul Sartin (Bellowhead, Faustus) team up for the first time, to present a weekend of songs from the Sartin family archives.

It’s more than 350 years since the first Sartins arrived in Dorset, with a strong maternal heritage steeped in folk song. Paul and Bonny will be giving talks about their ancestors and their influence on the British Folk Scene – many folk songs familiar to folk clubs will have their roots with Marina Russell (nee Sartin), her collections and members of the Sartin family.

Bonny has a long history with Halsway Manor and will enlighten us on the history of Halsway Manor in its role as the National Centre for Folk Arts.

Paul will lead choir workshops so there will be plenty of opportunity to raise our voices and sing together.

Paul and Bonny will give a concert performance on Saturday night.

Plus, there will be ample time to go for walks and discover the beauty of the Quantocks and surrounding Area of Outstanding Natural Beauty!

Singers of all levels of experience are welcome. You do not need to be able to read music.

The weekend will be led by Paul Sartin and Bonny Sartin with support from Host Meg Rose.

Bonny Sartin needs little introduction. Both a singer and writer fronting influential folk heros The Yetties folk band. He has a long running connection with Halway Manor having been a visitor since it opened and an organiser of dozens of weekend he was for seven years, president of Halsway Manor Society.