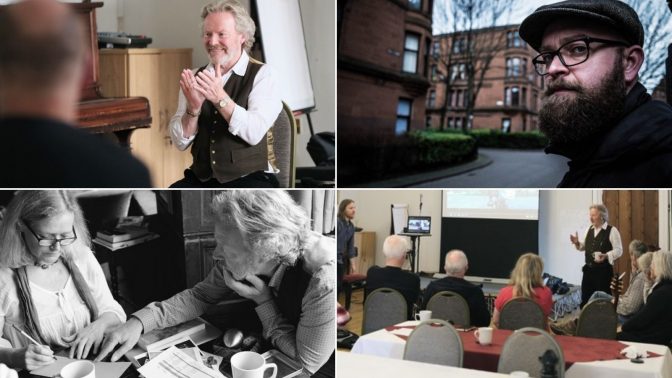 This is a partnership event.

A deposit of £100 secures your place, Reg's team will then be in touch to talk through your room details and a payment plan.

This course has been cancelled due to the ongoing COVID-19 pandemic. Please check back for details of rescheduled date.

We are delighted to welcome Reg Meuross back to Halsway to run another songwriting retreat. NB this retreat will be carefully distanced, as per government guidelines in February.

Reg will be joined by very special guest Findlay Napier. Reg and Findlay met for the first time at the Celtic Connections’ late night festival sessions in January 2020. Three months on they met again for a very special double-billed evening of storytelling in song, presented online by Oxford Music & Folk at Oxford Folk Weekend. The seeds were sown for these two to work together again. As well as running workshops and song clinics throughout the three days the pair will perform at a live gig on Thursday night (free for retreat participants and ticketed to the public).

This retreat is a wonderful opportunity for songwriters of all levels to forget about the rest of the world and immerse themselves in their writing amongst like-minded people, and well-supported by Reg and his team (Findlay Napier and Katie Whitehouse). The programme includes group and individual tasks to stretch and challenge, opportunities to collaborate, a chance to play songs to Reg and Findlay for feedback (song clinics), song sharing with the group, Q&A sessions, space to write brand new songs, time to relax at the bar, and to enjoy good food and good fun.

Songwriters of all levels are welcome, even absolute beginners. The course is tailored around the group.

Reg says: “Halsway is a stunning location for bringing people together in a creative way and I look forward to being back in February.

The words and ideas and thoughts that come from hard work and supportive interaction are uplifting and inspiring. It’s rewarding to help to ease people back into songs where they had perhaps become stuck or blocked in some way, and witness the sense of relief and renewed creativity. It is also hugely great to work with motivated people who have never written a song before and see the joy and satisfaction their first song brings to them and everyone around them.”

What people said at the end of the last retreat:

“I now have the confidence and the motivation to get on with it.”

“This was the kick start I needed to put my ideas into something concrete.”

“I’ve learnt not to complicate things in the early stages of songwriting, and to just write! Thank you for the encouragement and confidence.”

“I’m grateful for not only the excellent inspiring workshop, but the safe and encouraging environment in which I achieved my goal and have written my first ever song.”

Reg Meuross’ reputation as a master storyteller in song has been well earned. From gigging in village halls and folk clubs to playing the Royal Albert Hall and huge festival stages in the UK and abroad, Reg consistently entrances his audiences with songs of life, love and injustice, soulfully delivered with melodic tenor vocals and exemplary guitar playing. He has given lectures and presentations, and mentored students on songwriting at Durham, Bath and Bournmouth Universities. at festivals including Shrewsbury, Beverley, Trowbridge, Ely, Southwell, Weymouth, Towersey; and overseas at West Coast Songwriters in California, Kerrville Folk Festival Texas, and Uncle Calvins Coffee House Series in Texas.

The breadth and depth of Somerset singer-songwriter Reg Meuross’s material is unparalleled in contemporary folk: songs about forgotten heroes, famous names, folk legends, the climate emergency, tales from the kitchen sink and news from the world stage; if something needs to be sung about then Reg Meuross has a song for it.

“…assured a place in the pantheon of great folk songwriters.” David Kidman, The Living Tradition

“Classic, with echoes of early Dylan, Tom Paxton and Leonard Cohen” The Guardian

Findlay Napier is the first solo act to be nominated for Live Act of the Year at the Scot’s Trad. Music Awards Findlay Napier, and one of Scotland’s finest singer songwriters. Described as Micheal Marra meets Elvis Costello, a Caledonian Loudon Wainwright III or a Scottish James Taylor this master storyteller’s songs are full of earthy humour, hopeless love and biting satire..

“Songcraft and wit in the Difford & Tilbrook tradition” Sunday Herald

In 2017 he turned those same supreme songwriting and storytelling gifts, allied with magpie-minded imagination and truly magnificent vocals, to his adoptive home town Glasgow on VIP’s hotly anticipated follow-up.

Findlay was part of Folk by The Oak’s successful “Shake the Chains” touring and album project. 2019 saw his Story Song Scientist’s collaboration with award winning songwriter Megan Henwood tour across the UK in support of their eponymous fIrst EP. A tour and 2nd EP are due 2021. He is currently working with Blazin’ Fiddles piano/producer Angus Lyon on an LP of new songs called “It Is What It Is”. His third solo album will be released in late 2021 when he supports Eddi Reader on her autumn tour.

This year with his wife Gillian Frame and composer/producer/multi-instrumentalist Mike Vass he released The Ledger. The album, a time capsule of the 50’s folk scene, contains ten traditional Scottish folk songs. They performed The Ledger at the prestigious TED summit in Edinburgh and at Celtic Connections.